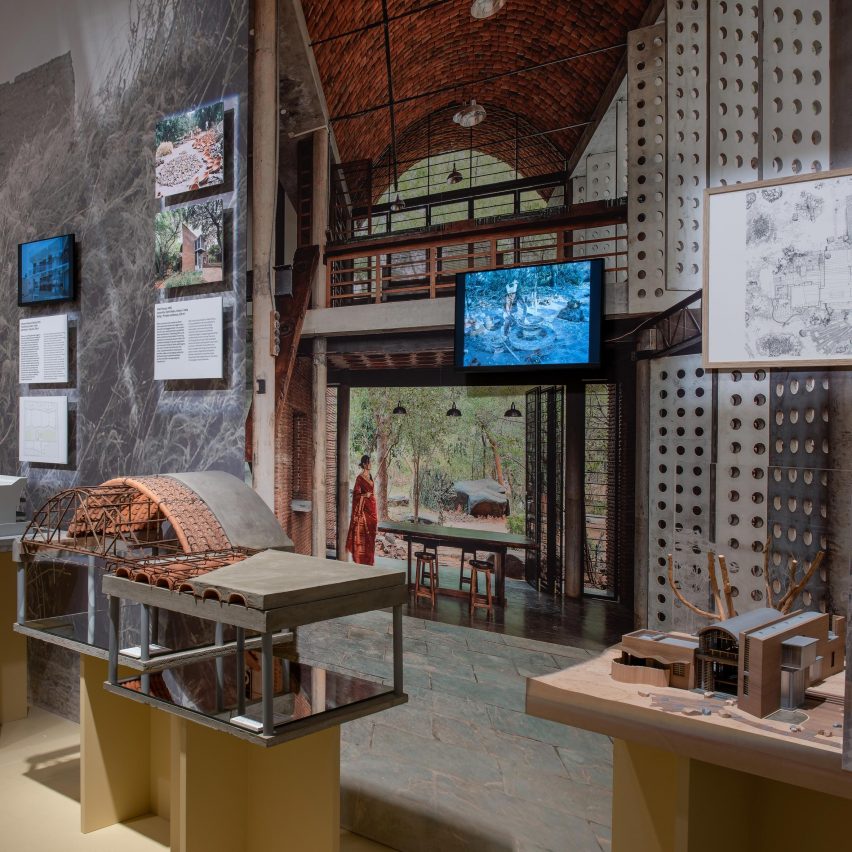 A major exhibition at the Louisiana Museum in Denmark shines a spotlight on Anupama Kundoo, an Indian architect with an unique knowledge of traditional materials and craft traditions.

Anupama Kundoo – Taking Time offers an insight into the ideas driving Kundoo’s “slow architecture” approach, which she has applied to both housing and community infrastructure.

This is revealed here through the inclusion of Kundoo’s architectural archive, which not only contains a number of intricate models but also various construction tools and material samples.

Exhibition highlights include a full-scale mockup of Kundoo’s affordable housing concept, Full Fill Home, which debuted at the Venice Architecture Biennale in 2016.

There are also detailed models of Kundoo’s own home, Wall House, a building that champions regional building traditions like achakal bricks and terracotta roofing systems.

Anupama Kundoo – Taking Time is the latest instalment in a series of exhibitions titled The Architect’s Studio, curated by Kjeld Kjeldsen and Mette Marie Kallehauge. In each, the aim has been to reveal the process behind the buildings.

“Kundoo tries to return qualitative time to the production of architecture – by human work and human hand, which naturally takes longer than machines but involves a far better sense of materials, detail, space and the building’s relationship to the site,” said the curators.

“Looking at Kundoo’s buildings, it is impossible not to sense that they are unique works, the epitome of site-specific architecture.”

The exhibition consists of two parts. The first room, called The Architecture of Time, is dedicated to archive material. Here, 13 building models are displayed alongside an assortment of artefacts.

There are three tables of materials: one featuring a mix of natural stones and wood, one covered in earth (both rammed and fired), and one exploring cement and concrete.

Also in this room is a model of the Volontariat Homes for Homeless Children, a cluster of dome-shaped housing units made from handmade mud bricks, and Hut Petite Ferme, the first house Kundoo designed for herself.

The second room, titled Co-creation, hones in on Auroville – the city where Kundoo has been based for the majority of her career, and where many of her buildings are located.

Here, the focus is on Kundoo’s largest project to date – the 240,000-square-metre housing development, Lines of Goodwill. A large model, along with 1:1 scale material samples, reveals Kundoo’s strategies for environmentally sensitive homes that connect residents to nature.

This is the fourth exhibition that the Louisiana has hosted as part of The Architect’s Studio series, following retrospectives of Chinese architect Wang Shu, Chilean architect Alejandro Aravena and Mexican architect Tatiana Bilbao.

“Of course, the whole exhibition series is to do with different cultures,” Kjeldsen previously told Dezeen.

Anupama Kundoo – Taking Time opened on 8 October and continues until 31 January at the Louisiana Museum. See ArchitectureEvents Guide for an up-to-date list of architecture and design events taking place around the world.