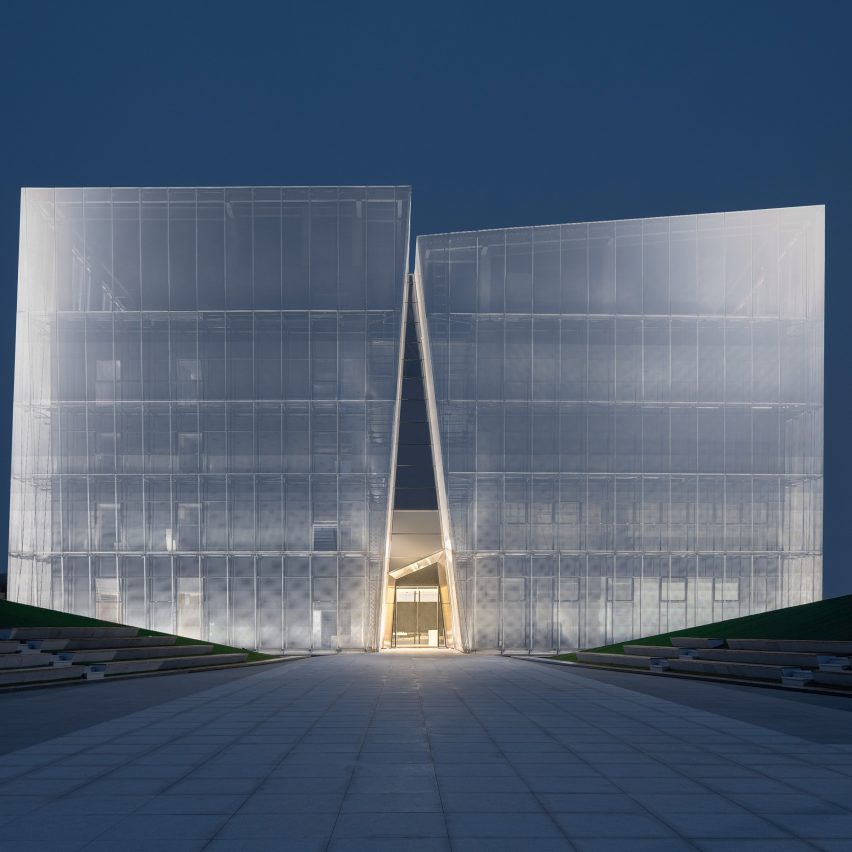 Chinese architecture studio AOE has wrapped a conference centre near Jinan, China, in a layer of perforated metal screens.

The Shuifa Geographic Information Industrial Park Exhibition Center sits 12 miles outside of the city of Jinan in east China.

An inner wall of glass is screened by slanting walls of translucent mesh, which appear solid from a distance and diffuse lights at night.

“The interior of the building is obscured by the white perforated plating,” said AOE

“As night falls, light shines through the perforated plates to make the whole building glow, like a piece of shiny marble standing in the wilderness.”

Four angular volumes lean towards and away from each other, creating canyon-like entrances. AOE  deliberately wanted the complex to look like stylised rock formations.

As one of the first projects to be built in the new Changqing Economic Development Zone, AOE used an introverted design to minimise views over the less-than-inspiring location,

“In order to eliminate the visual impact of the messy surrounding environment, geometrical hills are designed to surround the square, which slowly rises as people enter the site, gradually blocking out the view,” said AOE.

The density of the perforation increases as the floors rise, to match the functions of the rooms inside. Exhibition halls are located on the two lower floors, so the walls are more transparent.

Upstairs, the third and fourth floors contain office space and have a denser mesh for privacy.

“The gradual changes in the perforated plates allow the permeability of the building facade to gradually change from top to bottom, giving a sense of depth to the overall surface of the building,” said AOE.

This outer skin also shades the glass from the sun to keep it cool, regulating the building’s temperature in a more sustainable manner.

Water cascades down stone steps outside, a feature that is designed to look like “a stream of clear spring water flowing from the cracks in the rocks” said AOE, while the green landscaping is to evoke “a mountain waterfall”.

At the centre of the exhibition centre is a four-storey atrium lit from above by a skylight.

Perforated white metal mesh wraps the inner levels too, with cut-out windows for visitors to look out over the lobby.

AOE is an architecture practice based in Beijing.

More conference centres in China include Ningbo Urban Planning Exhibition Center, which is covered in green ceramic tiles, and the Light of Internet World Internet Conference Centre that is surrounded by robot-constructed pavilions.