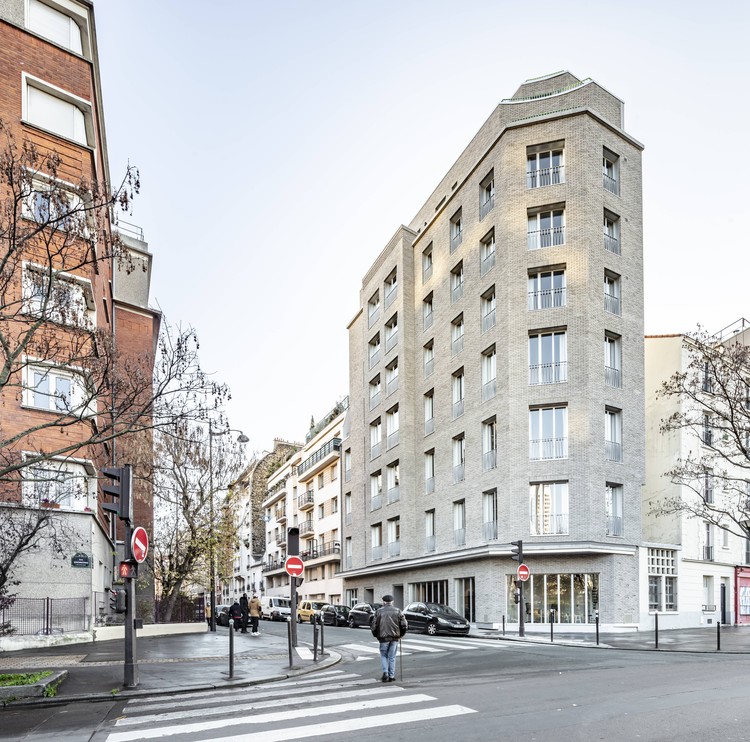 Text description provided by the architects. The project, at the corner of the Ridder and Vercingétorix streets in Paris 14th arrondissement, consists of the refurbishment and the raising three levels of a narrow mixed-use services building, into a 37-unit residence, being the first building managed by the Samu Social in Paris. The coated initial façade, its curved shape, mark the building of its design era. Its refurbishment gives it a more contemporary aspect, anchored it in its time, while nevertheless recalling the codes of typical Parisian architecture, also allowing it to impose itself in its street, in its environment. The orange coating has been replaced by a strong grey brick, the tone of which changes according to the sun. The very narrow plot has led to a very strict optimization of the project, and the conservation of a large part of the existing structure. All these constraints have given rise to a sharp project, rigorously designed and executed. In 2015, Groupe Galia acquired a private property in the 14th arrondissement, at the intersection of the Ridder and Vercingétorix streets, on a very narrow plot, a five-story building housing a training facility and offices.

The choice quickly turned to the idea of creating a residence for the Samu Social of Paris, which mainly helps homeless people. For Galia and CoBe, the Ridder Street building is above all a story of understanding and cohesion between a designer and his client. It is common research to build housing for social use, for families in need, so that the lodgers of the Samu Social not only find a roof but a real place to live. Groupe Galia and CoBe were easily able to find an agreement on all architectural, technical, and financial choices. The refurbishment of a services building into collective housing reinforces CoBe’s vocation to rethink the city over the city, to produce housing without urban sprawl, to meet needs on unused sites, to generate positive innovations, to create better living. For the first building managed directly by the Samu Social in Paris, for the first project development carried out for the attention of the Samu Social, Groupe Galia received this year the ESSEC Award of the Hospitable City, for the project developed in this building: “Host differently, towards a new form of social housing for homeless families.”

Shape – Facades. Groupe Galia chose to give CoBe a carte blanche to redesign the building. The choice of a mineral facade made of grey bricks was followed to give visual strength to the building but also to ensure its durability by using a noble material already existing in its environment. In order to respect the minimum separation distances, and to optimize the narrow plot, the building has been raised by three additional levels of apartments above the six existing levels, thus freeing large terraces around the common living rooms. At the corner of the Ridder and Vercingétorix streets, the building is characterized by a beveled edge and thus draws an elegant prow in which are housed common living rooms with wide bays. At the top of the building, this same angle is treated as a reversed-curve and produces an architectural landmark recognizable from afar, as well as two frames of windows, move forward slightly to startle the northern façade, inspired by the architectures of the great Parisian avenues of the twentieth century. The proportions of the windows and their layout have been redesigned to display a regular rhythm of bays. This gives the building a clearer and more powerful presence in its location, in order to allow it to reconnect itself with its surroundings and gives it a more Parisian appearance.

Constructive Mode – Materials. The addition of three concrete levels above the existing building required reinforcement of the existing infrastructure. In order to minimize the impact on the existing structure and surface, it was decided to create a second hand-molded grey brick facade on the Ridder and Vercingétorix streets to allow outer insulation with glass wool between the original reinforced concrete façade and the new brick façade. The bays are treated with aluminum frames to support the grey and silver tones of the facade. The metal railings protecting all windows, balconies, and terraces, take up a recurring pattern of Parisian residential architectures.

On the ground floor, some bricks are moving back from the nude of the building to create a discreet pat-tern that emphasizes the building at the corner of the two streets. On the other hand, the railings of the last three levels adapt their color into a copper oxide’s green-grey to throw the silhouette of the building to the sky.

Uses. The “Host Differently” initiative carried out by Groupe Galia for the development of this operation is about designing a new type of accommodation center, close to housing, in the heart of Paris, providing a range of services adapted to the needs of families, and open to its neighborhood. The aim is to allow them autonomy while facing precarious situations and to promote social inclusion in the city. Far from hotel accommodation and collective accommodation centers for families, it is a question of creating, with the technicality and the codes of a contemporary real estate project, a real place of life accessible to the poorest families with high-quality standards. The place consists of private apartments and a shared apartment for young women (18-25 years old), thus combining for the first time two types of public to create a positive interaction.

The design of the program, the responses to the needs of future users, were enacted by consulting the inhabitants of other similar shelters to ensure the quality of use of the residence. Thus, the accommodations have been designed to preserve the intimacy of each family, especially through parent corners and well-defined children’s corners. The accommodations are associated with common and shared premises: kitchen, dining room, offices, living rooms, children’s spaces, laundromat, furnished by an interior designer. The creation of additional windows to the original project made it possible to light up each dwelling as much as possible. A maximum of accommodations has an outdoor space, whether it is a terrace, a balcony, or a garden.