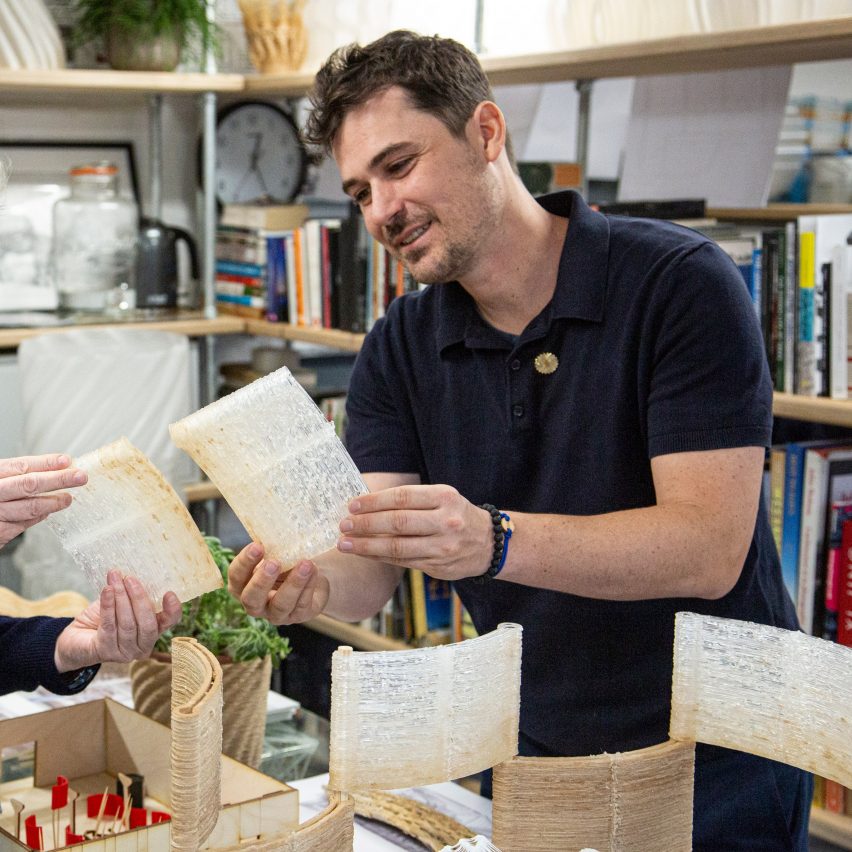 Arthur Mamou-Mani explains how he is partnering with Dassault Systèmes to investigate “cradle-to-cradle” architecture in the latest video of our Design for Life collaboration with the software brand.

Mamou-Mani, founder of London-based studio Mamou-Mani Architects, is the fourth designer to feature in the Design for Life collaboration between Architectureand Dassault Systèmes, which highlights designers who are using technology and research to build a better world.

Mamou-Mani has embarked on a sustainability-focussed collaboration with Dassault Systèmes that uses the brand’s software to investigate how different 3D-printable materials can be manufactured sustainably and printed into structures that can be recycled or repurposed.

The project is part of an ongoing initiative at Dassault Systèmes that connects the brand with designers to help them generate and realise projects using its technology.

Dassault Systèmes offers a suite of 3D software for designers, architects and engineers called 3DExperience, which includes well-known CAD products such as Solidworks and Catia, as well as virtual reality tools that are used in a wide range of industries.

“We’re collaborating with Dassault Systèmes on an experimental research project that will end up as an installation, which will describe the lifecycle of materials and apply technology to understand the science behind it,” explains Mamou-Mani in the video interview, which was filmed by Architecturefor Dassault Systèmes at the architect’s studio in London.

Mamou-Mani is developing an installation that demonstrates the findings of the research project, which will feature a structure comprised of 3D-printed modules that are printed, broken down and re-printed on site.

“The installation is made of a dynamic grid of 3D-printed modules, and cascades through the space as if it was taken by the wind,” said Mamou-Mani. “As part of the installation, we’ll have a 3D printer on site that will be printing modules in a bioplastic called PLA, which is made from fermented sugar.”

“The material is renewable and it comes from renewable sources that are sustainable, contrary to petroleum based plastic,” he continued.

The architect discussed the project with Dezeen’s founder and editor-in-chief Marcus Fairs and Dassault Systèmes’ vice president of design experience Anne Asensio in a live talk that launched the Design for Life collaboration.

According to Mamou-Mani, 3D printing structures could allow architects to reduce their impact on the environment by reducing waste and the need for structures to be transported to building sites.

“The advantage of building with 3D printing in architecture is that you can print on-site,” he said. “It’s also much more efficient because it’s directly linked to your computer models.”

In order to demonstrate the full lifecycle of the material used, the installation will also feature a plastic crusher that breaks down the modules so that the PLA can be reused.

“There will also be a plastic crusher on site, showing people how recycling can be done on a small scale,” explained Mamou-Mani. “The plastic crusher allows us to take a piece that’s already printed and bring it back into its pellet form, allowing us to print again.”

“From 3D printing to crushing to composting, we wanted to show all the states of the material, showing what is ultimately a renewable, cradle-to-cradle and sustainable lifecycle.”

Mamou-Mani made use of Dassault Systèmes’ 3DExperience platform while developing the project, including using parametric tool called xGenerative Design to arrive at the form of the modules, as well as using modelling tools to analyse the lifecycles of different materials.

“Dassault Systèmes had this really wonderful tool that allowed us to put science and metrics behind lifecycle assessments,” he explained. “This allowed us to compare different materials, different approaches, and all the different advantages and disadvantages of each.”

Mamou-Mani feels that paying close attention to the lifecycle of materials will enable designers to work more sustainably.

“It’s very important that designers start thinking beyond the timeframe of their project,” he stated. “They need to start thinking of where the material came from, where is it going, how can it be reconfigured – the entire lifecycle of a project needs to be taken into consideration.”

Footage of Galaxia Temple at Burning Man is by Matt Emi. Footage of Conifera installation is courtesy of COS.

Design For Life is a content collaboration between Architectureand Dassault Systèmes featuring talks and videos highlighting designers who are using technology and research to build a better world.

The video series began with a profile of Austrian designer Julia Koerner, in which she shows how she uses technology to apply architectural techniques to fashion and costume design.

In the next instalment of the series, Exploration Architecture founder Michael Pawlyn explained how biomimicry allows architects to have a positive impact on the environment.

The most recent episode focussed on Studio INI founder Nassia Inglessis, who described how technology enables her to create interactive spaces that respond to the bodies of their inhabitants.