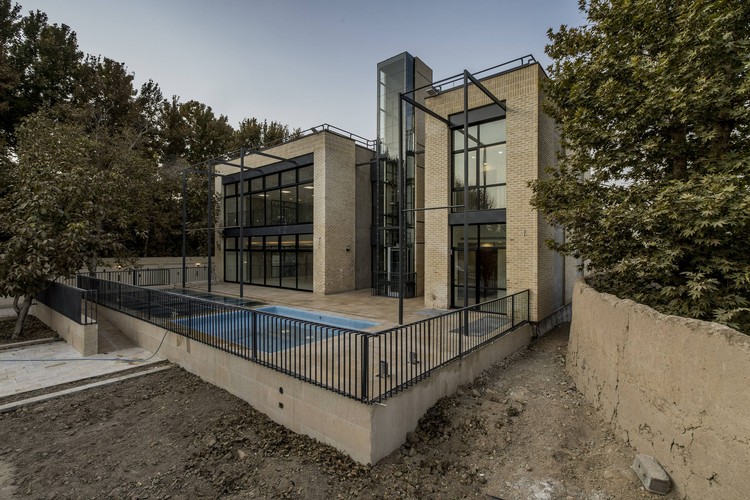 Text description provided by the architects. Autism is a developmental disorder characterized by troubles with social interaction, communication, and verbal behaviors. Treatments are done face-to-face, at long hours and hence, these treatments are very expensive, and usually, families cannot afford them. Therefore, the charity helps families in need. In 2015, a 3,000 square meter garden with an old building and a swimming pool was donated to use as a playground for children because they could not use the public recreation area.

The utilization of the garden should be planned in such a way to answer the following questions. 1- Providing garden maintenance costs 2- Optimization of irrigation and water supply systems 3- Making money for charity from renting the building 4- Using the garden building for charity community programs including public education 5. Locating of the new building on the old building footprint for legal and environmental reasons 6- Children with autism use the garden recreation area as a nature school.

Therefore, it was decided to use the Garden as a nature school for children with autism, and the building would be used to hold meetings, training courses and raise revenue from tenants to hold public and private meetings and events. A wide range of activities was expected for this project, so that designing a building with a specific performance was not an option. It was also assured that these demands were constantly changing over time. Therefore, a solution should be sought that would be flexible enough to respond to different functions.

Eventually, this shared structure was planned in three zones; the main zone, support zone, and an intermediary zone as the link between them. In this way, various utilization options were created by managing the mix of main and support areas. Requirements for gatherings, meetings, training courses, philanthropists and authorities, take place in the main zone; this space is completely transparent to the garden, which can be integrated with the outside space by sliding glass doors. Support spaces for serving the main activities including the bathroom, the kitchen, the management rooms, the consultant rooms, and the warehouse was identified.

According to the zoning done in the concept stage, the structure of the building consists of four pairs of concrete walls, the distance between any pair of walls is using for space connections of the building and the passage of the facility. Four pairs of pillars are connected by joist blocks. The rest of the deck is consoled to the main structure as slab and concrete beam. As a result, at the edge of the building, the height of openings will be as high as possible. The project attempted to maximize the integrity of the form, structure, and other elements of the project, and avoid using any excessive elements.