BLAF Architecten builds house in Belgium out of reclaimed bricks 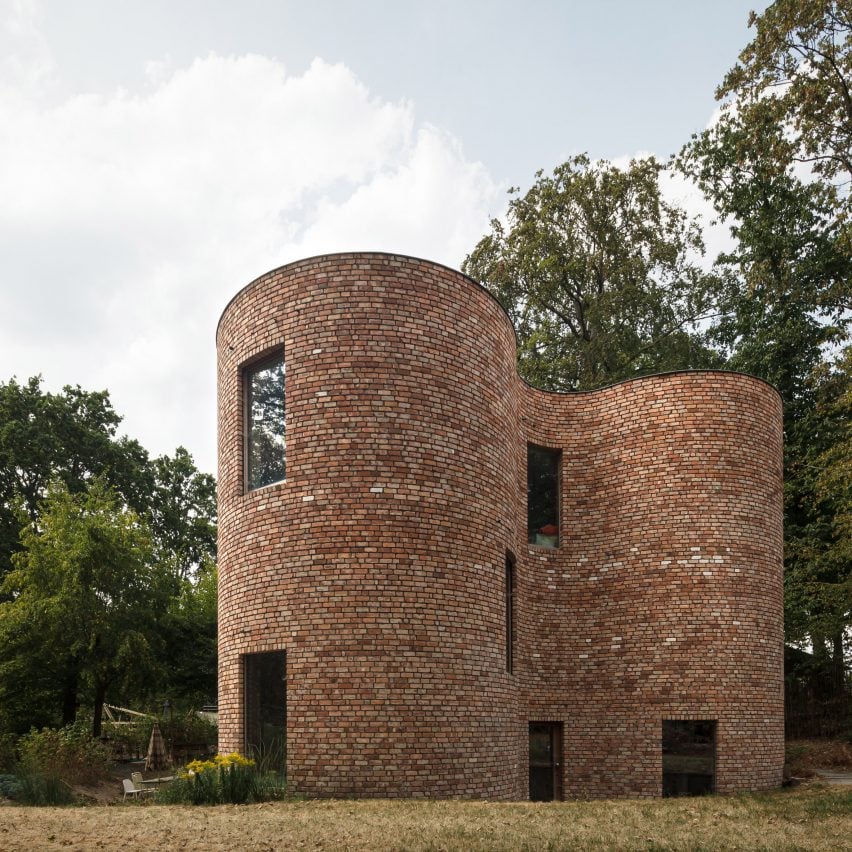 Belgian studio BLAF Architecten used reclaimed bricks to build this house in Ghent with an irregular shape that curves around existing trees.

Called GjG House, the project is set in the grounds of a 19th-century mansion very close to a main road, so the trees act as a screen.

“Instead of cutting the trees, the house was shaped to fit in between them,” explained BLAF Architecten.

BLAF Architecten re-used existing bricks to create the curvilinear walls of the house to cut down on waste, with wood and steel as supporting materials.

Tall, rectangular windows puncture the walls and there are glass doors on the ground floor to bring even more light to the interiors.

The studio said it wanted to show off the qualities of using real brick instead of a stuck-on facade.

“Since the introduction of energy performance standards (EPB) in 2006, thermal insulation in building skins gradually got thicker, causing a shift towards light and low-cost facade cladding materials,” said BLAF Architecten.

“As for brick buildings, this meant an evolution towards brick tiles glued onto buildings as ‘exterior wallpaper’,” added the studio.

This supposedly environmentally-friendly mode of construction could actually create more waste and pollution further down the line, the studio said.

“We noticed a construction method with layers glued onto each other would lead to the impossibility to separate the materials at the end of the building’s life cycle, resulting in huge amounts of non-re-usable waste,” it explained.

The construction for GjG House also means that inside the space is free from supporting walls.

“The shape of the shell allows it to be structurally autonomous,” explained the studio. “The stability of the outer brick wall is not depending on cross walls, columns or beams, but merely on its form and the brick bonding.”

Beams and brick walls are left bare in places as a feature. Platform-style levels create areas of double-height ceilings.

The kitchen is built into a curving wall, with two-tone blue tiles and bare wood cabinetry. The wooden furniture continues along the undulating wall, forming storage and display niches for the dining area.

In South Africa, architecture collective Frankie Pappas also used bricks to build an irregular-shaped house that fits snugly between existing trees rather than cut any down.

Photography is by Stijn Bollaert.

The post BLAF Architecten builds house in Belgium out of reclaimed bricks appeared first on Dezeen.