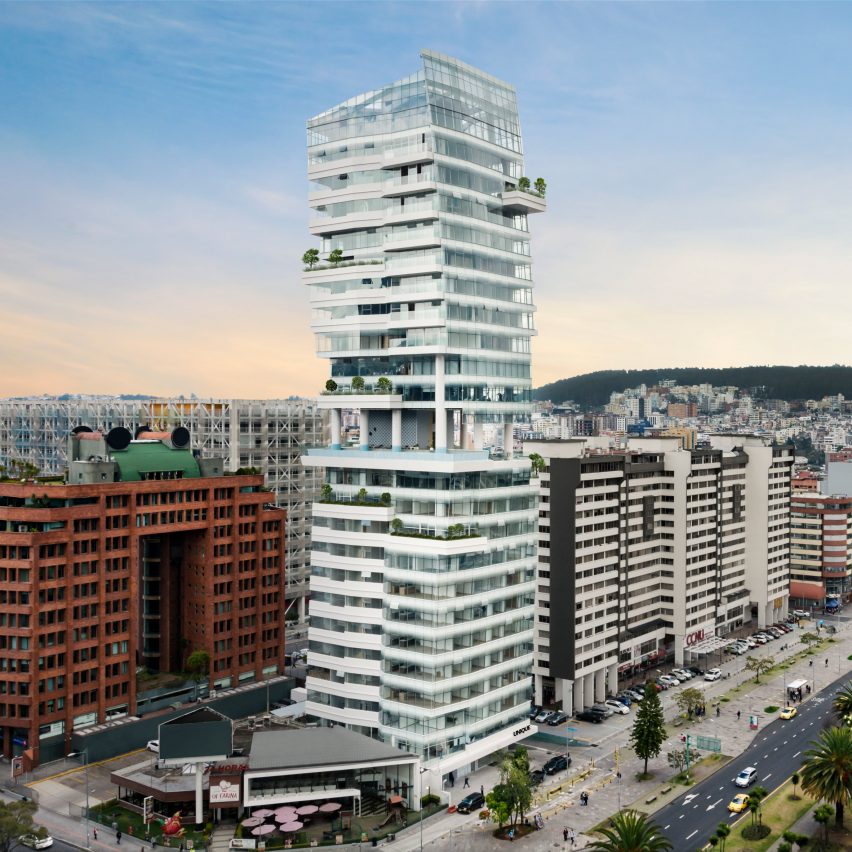 New York City-based architect Carlos Zapata and Quito-based developers Uribe Schwarzkopf have completed a 24-storey glass residential building, which appears to be split in two, in the Ecuadorian capital.

Unique contains 99 apartments and five units for commercial purposes and is located on the northern edge of the city’s La Carolina park.

The building is separated in two at the centre by a three-storey, outdoor communal area – circular columns are used to elevate its upper half.

Covered in wooden flooring, the outdoor area contains a swimming pool with steps down to an outdoor lounge for residents to enjoy city views.

“La Carolina Park was a major reference point for me on this project. I thought about the greenery, openness and access to fresh air that the park brings and wanted to mimic that feeling in this building,” Zapata told Dezeen. “Creating the open-air communal area achieved this – we created a space where people can spend all day, enjoying the surrounding views, yet having covered protection.”

The architect added that the broken form of the building – which rises 102.4 metres making it one of the city’s tallest – helps to relate it to surddouning structures.

“Unique also complements the surrounding architecture, by having the break at the midpoint of the building it aligns with the rooftops of the neighboring buildings providing a contextual relationship,” he explained.

Unique is fronted by curved sections of glass which are broken up by white aluminium panels, forming walls that wrap around the building. Inside, large expanses of glazing offer the residents views across the city.

“As our first residential building in Ecuador, we were inspired by Quito’s particular geographical setting – the surrounding valleys and the Andes mountains and volcanoes, the busy city streets, and ample green space,” said Zapata​.

“It’s always exciting to make your mark on a skyline, and we wanted to represent Quito properly and embrace its bountiful natural surroundings and dynamic community.”

The 18,846-square-metre building is complete with a number of amenities for residents. Among these are wellness facilities like a second pool on the building’s rooftop, a fitness room with a spinning studio and a spa that includes a sauna, steam room, and massage room.

There are also outdoor lounges with barbecues, a games area with an arcade, a children’s room and cinema.

Uribe Schwarzkopf oversaw the interior design choosing warm woods and green hues. White marble flooring in the lobby provides a backdrop to a golden reception desk with a wood wall covered in a decorative geometric pattern behind. There is also a large-scale work by a Quito artist installed in the lobby.

Unique was designed to be as environmentally friendly as possible, and the building incorporates electrical energy saving, potable water, the collection and reuse of rainwater, water treatment and irrigation systems.

Zapata lived in Quito from five years old to his teenage years before moving to the US, where he established his firm.

He joins an impressive roster of architects working with Uribe Schwarzkopf, which was founded in 1973 by Tommy Schwarzkopf. Today, he leads the company with his son Joseph Schwarzkopf.

Its other completed projects in Quito include YOO Quito residences by Arquitectónica and YOO studios, which is run by Philippe Starck and John Hitchcox.

Bjarke Ingel’s firm BIG is developing a mixed-used tower called EPIQ for Schwarzkopf, which is covered in pink, herringbone-patterned cladding, and the curved IQON tower, which is set to become the tallest building in the city, while Moshe Safdie has designed the Qorner tower.

“We were thrilled to bring Carlos Zapata and his renowned studio to Quito,” said Tommy Schwarzkopf​, founder of Uribe Schwarzkopf.

“His unique take on building design has added another beautiful landmark to our skyline and has provided our community with a first-class residence in a dynamic neighbourhood with close proximity to La Carolina park and access to a major Metro station.

“This building will have an enormous impact on the neighbourhood and improve the quality of life along the avenue it anchors.”