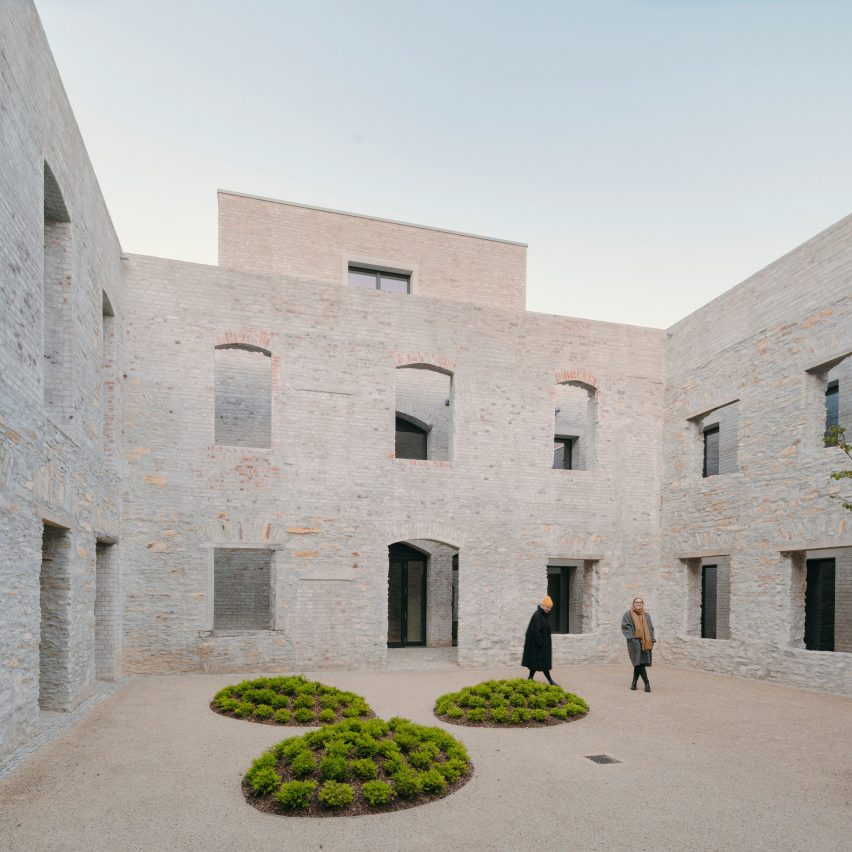 An abandoned hospital in western Germany, originally built as a monastery, has now become an office designed by David Chipperfield Architects.

This involved removing various extensions added in the aftermath of the second world war, revealing the historic walls that were previously covered, and adding three new office wings.

Tap Holding called the project Jacoby Studios, after the family that runs the company.

“The Jacoby Studios create a new urbanistic whole out of fragments,” said David Chipperfield. It is an approach he has become known for, on projects like the Neus Museum in Berlin and the Royal Academy renovation in London.

“The project combines a wide range of the practice’s experience – reinterpreting historic buildings, combining the old with the new, balancing landscape and building – to provide a comfortable and stimulating workplace,” he said.

The design team focused their attention on the most historic parts of the 17th-century structure. Removing all of the 20th-century extensions and modifications, they were able to uncover the original quarry-stone masonry.

The best examples of this include the original chapel facade, with its steep gable profile, and the old cloister. In the new site layout, these elements become focal points.

Alexander Schwarz, who leads the Berlin studio, described it as a process of “almost sculptural demolition works”.

“The ruins, both found and invented, form the picturesque and structural nucleus of the design,” he said.

“The new, tectonic volumes adopt the orthogonal geometric order of the ruinous cloister, creating a structure that appears as a complex three-dimensional composition within the urban surroundings, similar to a monastery,” he continued.

“It connects the historical traces and fabric of the old town with the typical post-war modernism idea of the urban landscape and forms a new architecture from it, in which both the sensual and structural aspects are immediately apparent.”

The new-build part of the project comprises a series of two- and three-storey volumes, arranged around the north, west and south sides of the existing structures.

These buildings feature modular concrete structure, which allows them to tonally match with the old stone. The glass facades are recessed within the frames, allowing a visual hierarchy while also creating balconies where staff can take a break from their work.

In some places, the stonework walls are now visible inside the building. In some areas, the stonework has been infilled with bricks, which further reveals the layers of history within the structure.

In total, the building contains 12,500 square metres of office space, which includes a staff canteen, a photography studio and a showroom.

Jacoby Studios was longlisted for ArchitectureAwards 2020 in the rebirth category. The project that won this category was Party and Public Service Center, a community centre in Yuanheguan, China, by LUO Studio.

Photography is by Simon Menges.