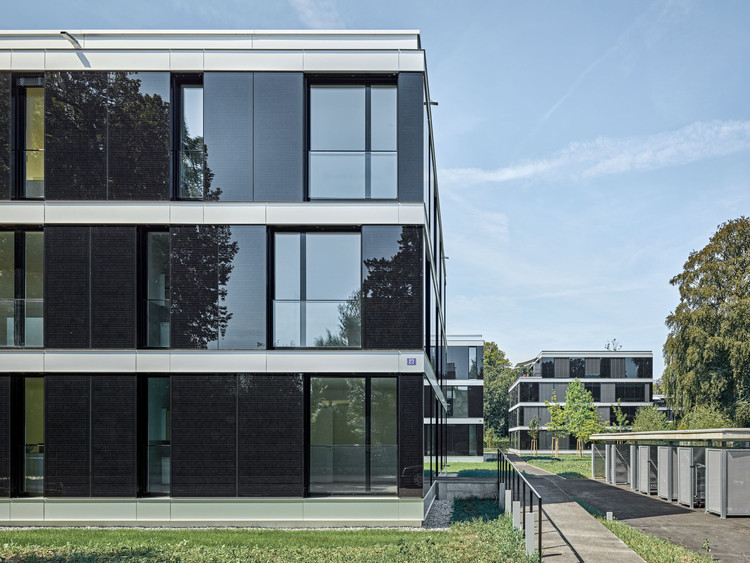 Text description provided by the architects. In 2010, the Fehlmann estate was developed with six pavilion-style residential buildings by BGP, which satisfy the desire to live in natural surroundings while being near to urban facilities. Since August 2020, they have been complemented with two further buildings, which tie in with the existing structures in their design and their arrangement on the plot. From a distance, they are indistinguishable from the earlier buildings. If you take a closer look, however, depending on the angle of the sunlight, you see that the new buildings are clad with electricity-generating photovoltaic (PV) modules instead of black-enamelled glass panels.

FOR MANY INSTEAD OF FEW
The concept of the estate as a whole follows a modular principle, comprising three different types and sizes of building. These point blocks differ in the size of their footprints and in their silhouettes, making it possible to respond sensitively to the various heights and massing of the buildings in the three adjacent streets as well as the historic Fehlmann villa onsite. In order to preserve the park-like atmosphere, the permissible building heights and the plot ratio have not been exploited to the maximum. The accentuated base of these black cubes marks the interface between building and park, between private and collective.

REFLECTIONS IN THE PARK
Almost all of the fourteen new rental apartments open onto the outdoor space on three sides. The floor plans respond specifically to aspects of the built and natural surroundings that vary from floor to floor.

The new buildings, like those of the first phase, follow a simple structural principle with a central stair core. The windows are staggered from floor to floor, generating subtle variation in the facades. The play between the transparent panels and the deep black PV glass elements makes the houses seem immaterial.

AESTHETIC POTENTIAL
The facade performs a variety of tasks to do with protection, climate regulation, aesthetics and identification. A key objective of the design concept was to create a facade with the additional property of being able to produce electrical energy, which would nonetheless fit almost seamlessly with the appearance of the existing buildings and avoid impairing the urban and architectural qualities of the development.

‘Our vision of the use of photovoltaics takes the neighbourhood into consideration. For a long time, this technology was all about self-sufficiency: buildings that function independently of public utilities. The next step, as we see it, is to form closely knit energy associations that are based, above all, on the principle of solidarity. In this model, not every building produces electricity. That is neither realistic nor necessary.’
– Sebastian El Khouli, partner, BGP Architects

In preparation, the electrical engineers measured the rates of electricity usage in the existing buildings on the estate for a week. As they mainly contain apartments, consumption was found to be greatest in the morning and evening. Vertical PV modules integrated in the facade cope with these morning and evening peaks better than a PV system on the roof can. The facade-mounted system also produces electricity more evenly over the course of the day and the year. To increase the self-consumption, charging stations for electric cars and e-bikes have been provided as well as a connection for the later installation of a battery storage unit.