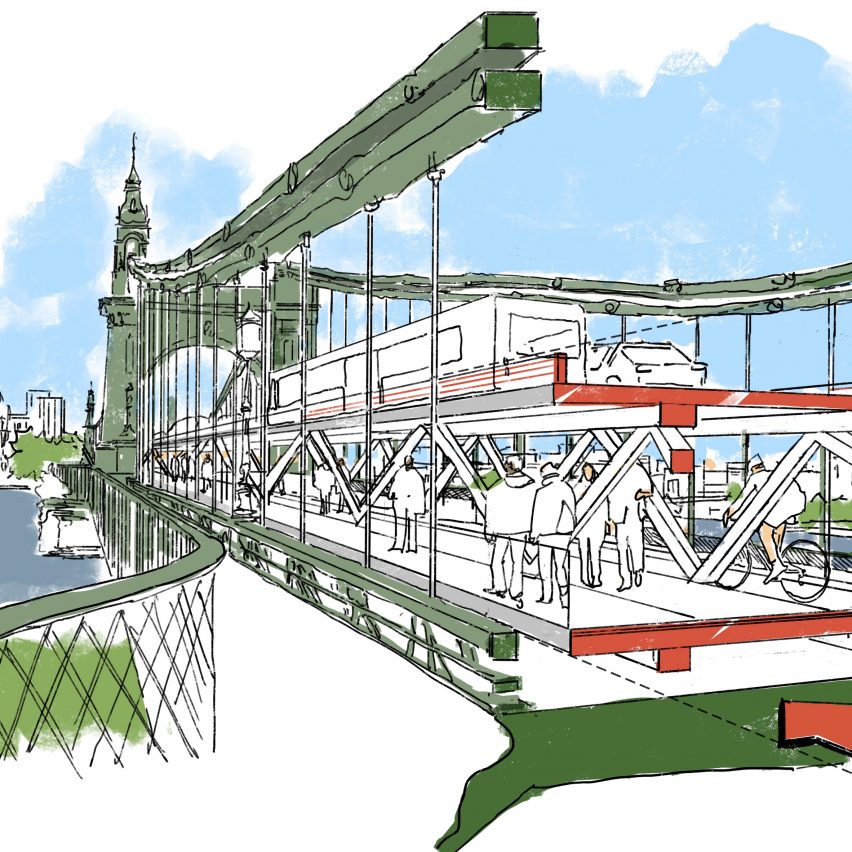 Architecture firm Foster + Partners has developed a proposal for repairing London’s Hammersmith Bridge while reopening it by inserting a separate double-decker road raised over the original structure.

An extra deck would allow vehicle traffic to drive over the top of a pedestrian and cycle path, freeing up space for workmen to carry out essential repairs.

The temporary crossing, which wouldn’t rest on the bridge, could be built in two parts and inserted across the bridge from both sides to meet in the middle.

Supported by truss structures on both sides, it would allow the bridge, which is currently closed, to reopen to pedestrians and vehicles while repairs are made.

Using the decks as a platform, workers could remove sections of the Grade II*-listed bridge and ferry them away on barges for specialist repairs.

Foster + Partners has presented the proposal to Hammersmith and Fulham Council, which has been struggling to raise funds needed to repair the 133-year-old bridge.

“Delivering a temporary crossing quickly, whilst providing a safe support to access and refurbish the existing bridge.”

Hammersmith Bridge over the Thames has been closed since 13 August 2020 as it was deemed unsafe. Sensors placed on the bridge revealed that microfractures were developing in the bridge’s cast iron pedestals.

Due to decades of unchecked corrosion, the bridge could shatter and plunge traffic into the river at any moment.

Hammersmith and Fulham Council estimated the cost to repair the bridge, which first opened in 1887, would be £46 million just to stabilise it, and £141 million to restore it to a state where it could open to motor traffic again.

Foster + Partner’s proposal could prove more cost-effective, allowing the bridge to reopen to the 22,000 vehicles who used it to cross the river in the UK’s capital every day.

The lower deck would give workers a safe way to access the original bridge’s pedestals, anchors and chains. Removing and repairing elements off-site would be easier, and also cut down on noise and disruption.

“We consider that this approach is practical and viable,” said COWI executive director David MacKenzie, the engineering firm partnering with Foster + Partners on the project.

“Our experience is that offsite refurbishment of bridge structures is safer and more controlled, and results in a higher quality final outcome when the structure is re-installed.”

Hammersmith Bridge was designed by 19th-century civil engineer Joseph Bazalgette, and was the first iron suspension bridge to span the Thames. The landmark structure is painted green and gold, with monumental towers sporting heraldic crests.

Foster + Partners was founded in 1967 by Norman Foster, three years before Hammersmith Bridge was given its Grade II*-listed status.

The practice recently won the competition to design a pair of bridges in Suffolk, one for vehicles and the other for cyclists and pedestrians.