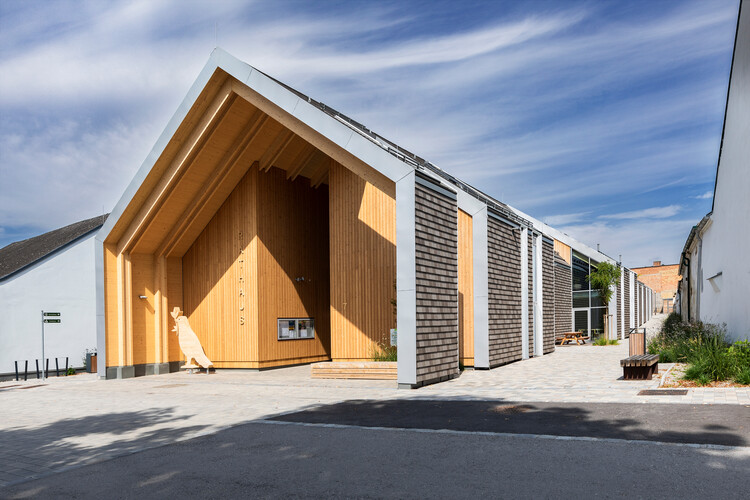 “The donut effect” – a familiar occurrence in Austrian communities. It slowly draws traffic away from town centers via local suppliers on the periphery, leaving the center to die out. Our new community center, however, is fighting back against the donut effect. Developed out of the row of houses at the main square, this new heart of the village opens up as an inviting and welcoming gesture. Citizens and visitors alike will not only feel welcome, but also feel encouraged to make use of the building. A strong symmetry to the main square adds gravitas and meaning to the self-evident gathering place. The rotation of the structure and the resulting opening of the site, along with the orientation of the main entrance onto the main square, expresses an ultimate gesture of welcome. encouraging visitors to explore and discover.

The narrow “Winzergassen” (Winegrowers’ lanes) offered by the frequent rhythmic shifting of the building structure provide charming inner courtyard environments, as well as space for developing a variety of activities. The new community center is functionally and structurally divided into 3 parts. Oriented to the main square at the front is the town hall. The second part of the building contains a clubhouse, providing flexible space for a variety of traditions and activities. Finally, in the eastern part of the building, a medical center provides space for up to 5 doctors operating within a group practice. The building is segmented into several parts that are shifted to each other. On one hand, the building is sliced into bites that are compatible with the local scale, while on the other hand, it clearly depicts the spatial program and functions. The entrances for the clubhouse and the medical center are also created in the offset areas. This offer is supplemented by the flexibility of the program, which provides citizens with a variety of options for using the building for themselves, whether in the clubhouse, via the outdoor areas, or in public zones in the city hall itself. The integrated medical center and a potential area at the rear of the property also provide an increase in frequency.

The new community center is proposed to play a central role in village activities. It is the antithesis to a mere administrative building and is interpreted as a built manifestation of a lively and active village center. Before its completion in 2020, the project was chosen, from a field including 3 other architectural firms, as the winner of a competition organized by the municipality of Großweikersdorf in October 2017.