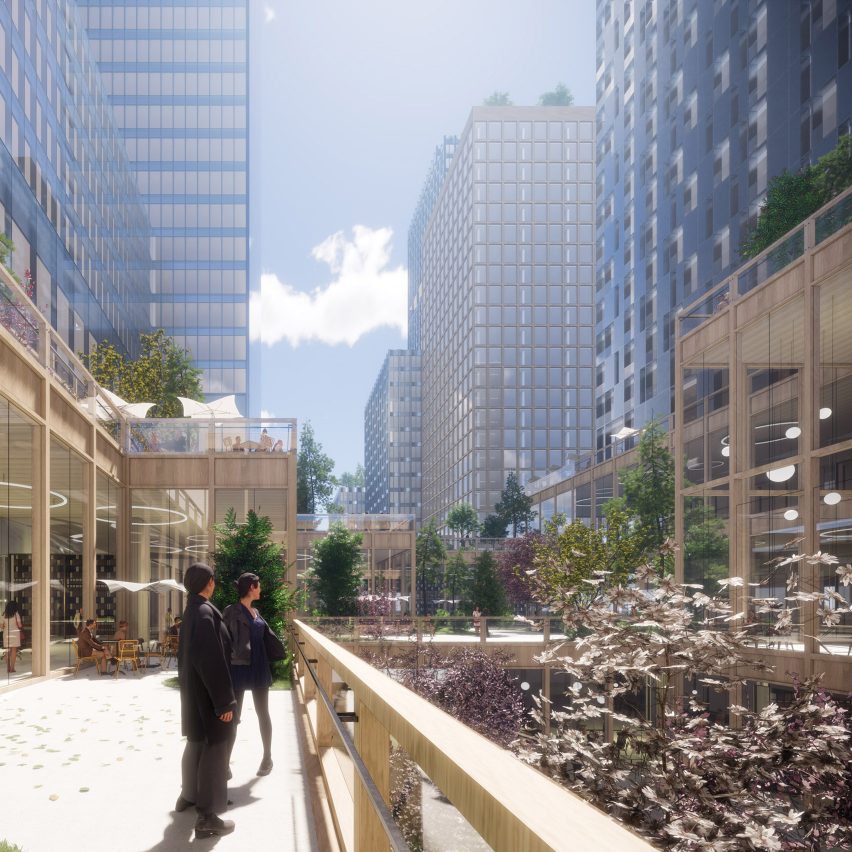 A cluster of towers and timber buildings will be swathed by greenery in Seoul Valley, a mixed-use scheme that Danish studio Henning Larsen has proposed for South Korea’s capital.

The 360,644-square-metre development is intended to transform an inaccessible site in the Yongsan District and will incorporate courtyards that link up with MVRDV’s Seoul Skygarden.

Among its facilities will be shops, workshops and a conference centre, alongside towers containing hotels, offices and apartments – designed by Henning Larsen with local architect Siaplan and retail consultant Benoy.

Henning Larsen’s design was the winning proposal in a competition for Seoul Valley, selected over entries by the likes of MVRDV and SOM. It is due to enter the schematic design phase in 2021.

Once complete, it will form a part of a wider masterplan to transform a long, isolated stretch of land sandwiched between Seoul Station’s rail yards and an eight-lane motorway.

“The area around the Seoul Station is a future development area where the rail tracks will be covered and new commercial and financial districts will rise,” said Nina la Cour Sell, partner at Henning Larsen.

“This district will form the northernmost part of that plan. Until now the site has been an inaccessible island in the city – with the new development it will be both an attraction and an urban shortcut in the busy area,” she told Dezeen.

Henning Larsen’s design for Seoul Valley attempts to reconcile the contrasting scales of architecture in Seoul, ranging from the city’s small traditional villages and gardens to contemporary skyscrapers.

It combines a group of towers visible within the city’s skyline with a series of smaller developments that will be staggered around gardens and courtyards to ensure the scheme is human in scale.

“With Seoul Valley, we were interested in developing a scheme that merged the outsized scale of the city today with the small patchwork structures of its past,” explained Jacob Kurek, Henning Larsen’s partner in charge.

“By dissolving the scale at the public levels, we not only make it feel more livable but nod towards the beautiful structures of old Seoul. Our hope is for Seoul Valley to become a home to not just high-end shops but also craftsmen and artisans.”

Details of the building’s materiality are to be decided, though each tower is expected to have unique but complementary facade treatments, offering variety while ensuring they read as “one family”.

To help minimise the environmental impact of the scheme, there is an ambition for a large portion of the smaller spaces to be built with sustainably-sourced timber.

Greenery and landscaping will play a key role in the development, with courtyards, gardens and buildings interiors filled with plants nestled throughout.

This includes a plant-filled podium below the towers that will be landscaped to improve local air quality and support biodiversity, health and wellbeing. It will feature three layers, named the Biospheric Layer, Percolation Layer and Conscious Layer, which will feature different plants species with varying benefits.

Terraces will also be incorporated on the upper levels of the towers to help connect occupants to nature and offer them respite from the bustle of the city.

Henning Larsen was established in Copenhagen 1959 by the Danish architect Henning Larsen. It was awarded the European Prize for Architecture in 2019.

Elsewhere, the studio is developing the “first all-timber neighbourhood” in Copenhagen and a two-square-mile business district for Shenzhen.

Visuals are courtesy of Henning Larsen.