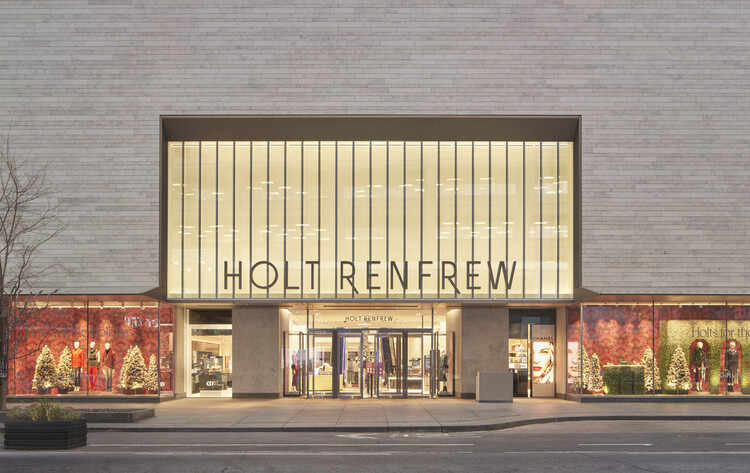 Text description provided by the architects. To re-establish themselves on a popular shopping street in Downtown Toronto, Holt Renfrew sought to design a facade that would give their store a unified presence and represent their iconic brand. With a flagship store located in of the most expensive shopping streets in downtown Toronto, Holt Renfrew engaged Gensler to upgrade their window displays and disjointed facade to create a strong, unified visual presence that would not only showcase their luxury retail goods, but also create established entry points, and let natural light into the interior spaces.

The first step in the renovation process was to rationalize the store’s entire envelope and devise a strategy to unify the five separate buildings into one presence so that customers could see how large the store is from the street level. With over 270 feet in street-facing storefront, or almost the length of an entire city block, the exterior design needed to be seamless and reflective of Holt Renfrew’s iconic brand. One of the main challenges was to design a facade that was both light and intricate. The existing building was clad in marble that was uninsulated and the construction assembly attached to the building was worn and corroded. With the various small renovations that occurred over time, there were a variety of errors that caused the building to leak and perform poorly in terms of energy usage. The new facade was constructed of limestone that was full of fossils and brought a sense of liveliness and a variation in texture between the stone panels.

For the glass elements, which included the replacement of the existing dark and gloomy window displays and the revitalization of a main entrance, large panels that allowed for minimal joints and no mullions were used. The clear glass allowed ample views into the store that displayed the merchandise inside, and also brought in natural light. The canopy structure above the main entrance is constructed from bronze anodized aluminum and creates a procession on the street level. Overall, the project took three years and at no point was the operation of the store closed down with occupants welcomed throughout the duration of the facade’s construction. The result is the unified presence and a modernized facade that situates and establishes Holt Renfrew as a leading luxury department store.