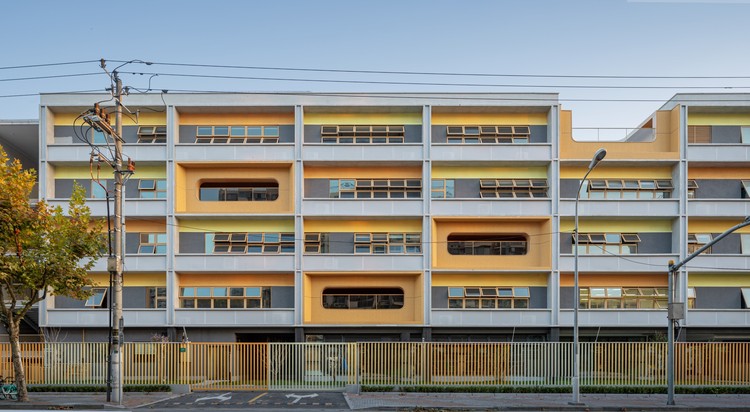 The Only Layout
Huazhan campus of Gaoan Road No. 1 Primary School is located at the intersection of Longwu Road and East Huazhan Road in Xuhui District, Shanghai. With a compact site, this 40-class school was built under a high FAR of 1.4. On this long and narrow site, the only suitable location for the 200-meter track and field is on the west side, which also helps to block traffic noise from Longwu Road. According to building codes regarding setback, fire protection, sunshine and noise control, the main classroom building can only be arranged in two rows on the east side. The multi-function building is then located between the playground and the academic area, accommodating the multifunction hall, covered sports field, gymnasium and other activity spaces.

The superposition of area index, site limitations, and building codes solidifies the layout, leaving little room for changes. The compact site reduced the area for playgrounds and green venues, which would make daily educational activities more confined to standardized classrooms, while corridors and stairs only meeting circulation demands – these realities concerned architects about the rigidity of the campus. Therefore, how to create a lively educational space in this “only layout” became the most difficult yet meaningful challenge in this project.

Enclosure and Transparency
In the compact layout, the combination of four and five-story massing could easily form an enclosed block. It is necessary to improve the overall spatial quality of the campus through partial openings. We divided the block into four parts and set up passages and staircases between them, so that teachers and students can see the scenery of different spaces inside and outside the campus when they pass by. To avoid the separation between the playground and the central courtyard caused by the multi-function building, we lifted the gymnasium to the third floor, and lowered the small theater to semi-underground level and placed green slopes and grandstands on periphery, which reduced the impact of the large scale of multi-function building and formed a covered sports field on the second floor. This semi-outdoor space is connected to the gymnasium atrium vertically, and connected to the playground and the central courtyard horizontally. The narrow and long central courtyard will create a sense of constriction, so we added airy bridges to strengthen the connection between the north and the south and to change the proportions of the courtyard, bringing a spatial hierarchy to this wooded green space. Through these design strategies of transparency, we established a layered connection between the central courtyard and the surrounding space and the external environment, and expanded the spatial perception of the campus.

Prefabricated Structure and Spatial Order
The gymnasium and the covered sports field in the multi-function building are both large-span spaces. In order to meet the prefabrication rate and reduce the structural height, the main structure adopts a steel frame system supported by shear wall on the second level to achieve an open floor. The inverted trapezoidal shear wall is retracted at the bottom to help open the view of grandstand and highlight the suspension of the upper building. The changing “aperture” openings on the shear walls dissolve the dullness of the structure and imput a fun of eye contact. Since Gaoan Road No. 1 Primary School is Yao Ming’s alma mater. The client pays much attention to the indoor gymnasium on the third floor. Instead of using usual truss or network frame structure, we used braces on the upper part of the steel column to assist the 800mm high steel beam to complete 23-meter span. The triangular area formed by braces is further used to create a semi-transparent space for ventilation and natural lighting, injecting spiritual brilliance into this gymnasium with exposed structural bones.

In order to control the overall cost, the concrete frame structure of the classroom building and office building adopts a combination of prefabricated and cast-in-place reinforced concrete structures. Compared with ordinary prefabricated systems, we have made three new attempts. One is to use a cantilever to support the outer corridor of the single-row classroom building to obtain a free interface between the corridor and the courtyard. The collateral single-span issue was solved by a shear wall in between the span; the second is to eliminate the secondary beams and ceilings by using prefabricated profiled reinforced concrete composite slabs. The electrical pipelines and the sprinkler branch pipes can all be lied along the grooves of the slabs, so that the 7.5mx 9m classroom unit gains the largest clearance and integrality of space. The third is to enlarge the joints of prefabricated reinforced concrete beams and columns, which improves the reinforcement and cast-in-place conditions of the junctions. The enlarged semi-arch column heads form the basic framework of form order. The structural element of the arch frames is constantly reproduced in school gates, lobbies, corridors, classrooms, cabins, libraries and gymnasiums, becoming the motif of spatial shaping.

Through careful articulation of the structural system and prefabricated units, we have obtained a concise, regular and hierarchical spatial order. It not only satisfied the normative requirements of various teaching spaces, but also increased the flexibility of the unit space, where we can inject more spirituality into this primary school.

Activation through Body & Mind
When communicating with the potential school users, we deeply felt their needs for diversification and differentiation of teaching and communication spaces, which coincides with our vision of exploring the spirit of educational space in the project. In order to encourage diversified educational methods and social ecology, we start from the structural order and use architectural methods to activate the formation of these two customs, and explore new types of space to provide more spatial support for quality education.

In the classroom unit, a beam-column frame connected by a semi-arched column head emphasizes the directionality of the classroom, providing a “frame” for the teacher and the intelligent blackboard, helping students to develop the habit of focusing on the front. Together with the structural system, the integrative ceiling without sub-beam, the symmetrical window sashes on both sides, and the aligned air conditioners at the front and rear doors all help to give the space a stable order and bring even and warm light to the classroom.

In the limited building area, the unique experience and diversification of the circulation space can help us to activate the solidified order, which can be seen at the rope stair in multi-function building, the color distinction of the stair with deformation joint, and the three-dimensional courtyard composed by zigzag corridors between the north and south buildings. In the corridor, the semi-arched cantilever structure leaves free space on the facade. We wove a translucent wall outside the corridor with steel keel, metal mesh and glulam, which accommodates protective nets and fire hydrants and integrates stools and reading panels. Together with the schoolbag cabinets and benches inside the corridor, they become fixed furniture in the corridor space. By naturally and unconsciously activating children’s and teacher’s behaviors, the space encourages users to touch the nature in the courtyard and to use the furniture to rest, read, talk and play, which gives more connotations to the corridors.

We also placed various multi-functional semi-outdoor “cabins” on each classroom floor. Equipped with drinking fountains, operating tables and smart bookshelves, these “cabins” not only provides a nearby play area for the break between classes, but can also work as semi-outdoor classrooms and gathering spaces. This new type of space is neither a fixed classroom nor a circulation space, but more like a semi-outdoor courtyard implanted in the building, adding diversified educational and social possibilities to the campus, and awaits further planning and exertion in the future.

Enlightenment of Order
The education system, planned land use, and building codes together form the social order of school buildings. Through in-depth interpretation, we try to transform these restrictive orders into the ontological power of architecture, so as to imput more physical and mental care, dedicated spirit, and vitality of communication into this campus. We hope that with the joint efforts of all parties, the campus to remain in the memories of students would not only be the concentration in the classroom and the neat queue on the playground, but also the moving sunlight in the gymnasium, the free speech in the cabins, and the moment of picking up a book in the corridor and facing the woods.