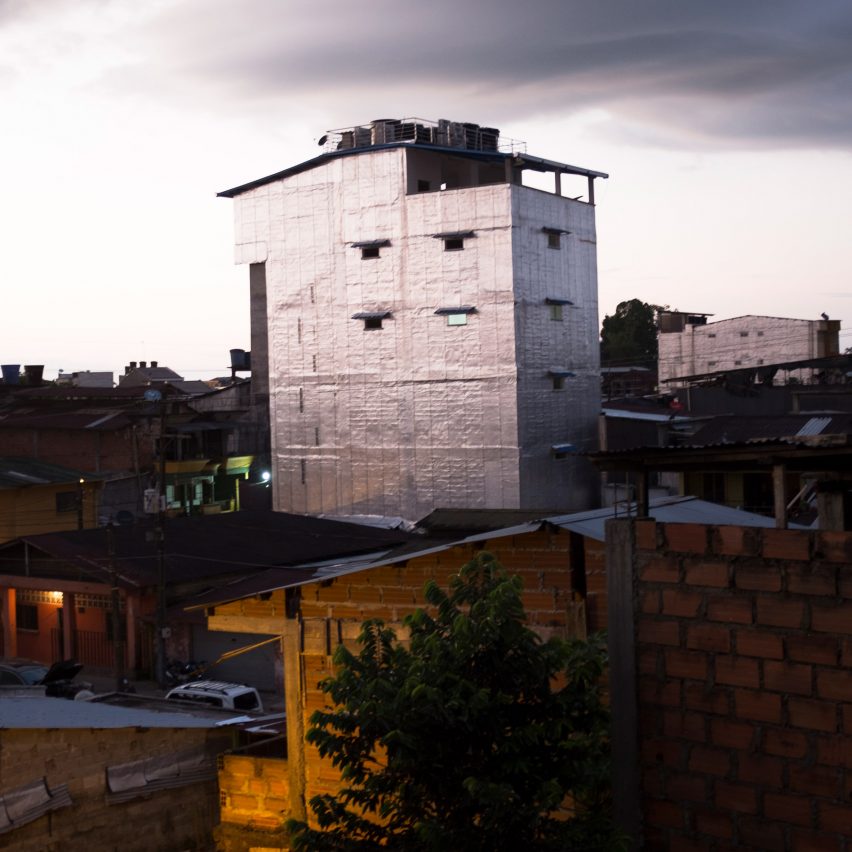 American photographer Kurt Hollander’s latest photo series focuses on the aluminium-clad homes in the Colombian city of Quibdo, which he has termed shimmering architecture.

The collection of photos documents a series of buildings in the city of Quibdo, located within the rainforest in west Colombia, that are clad with self-adhesive aluminium sheeting to protect them from the local climate.

Hollander first spotted the shimmering architecture from an aeroplane on his way to visit Quibdo.

“On a two-week-long escape from the pandemic lockdown in Cali, my current city of residence, I travelled to Quibdo, a rainforest city in Colombia populated mostly by Afro-Colombians and indigenous people,” said Hollander.

“As I was flying in, the sun broke through the clouds and dozens of buildings wrapped in self-adhesive asphalt with an aluminium foil surface lit up and began to shimmer in the sunlight, something which, as far as I know, doesn’t exist in any other Colombian city or elsewhere,” he told Dezeen.

Made for protecting flat roofs, the asphalt and aluminium sheeting has a practical purpose of protecting concrete and breeze blocks from the wet and bright, tropical weather. However, Hollander also believes that the shiny finish is desirable in a city that has a long connection to mining.

As with previous modern building components, like stainless steel mosquito screens, aluminium sheeting has become a status symbol in the city.

“Quibdo is in precious metal territory – mines around the town have long provided gold and platinum to the world, all that glitters is good, and this holds true for local architecture, as well,” explained Hollander.

“Just as zinc roofs and stainless steel mosquito screens on windows became a symbol of social mobility in a land of local, natural materials, imported aluminium siding on buildings has become a recent status symbol used to convert concrete or brick buildings into shiny, sexy structures.”

The aluminium sheeting highlighted to Hollander the contrast between the traditional homes in the city that were created from local materials and the buildings made from concrete than needed additional protection.

“Quibdo retains strong roots to traditional architecture, with dozens of homes made from wood, bamboo cane and palm leaves and built on stilts to avoid flooding when the nearby Atrato river overflows,” said Hollander.

“I was immediately struck by the contrast between the traditional architecture made with natural material obtained from, and blending into, the surrounding forest, and the shiny metal buildings that looked like an invasion of space-age, alien lifeforms.”

The photographer believes that this shimmering architecture highlights the contradictions occurring within the mining city.

“I am a big fan of vernacular architecture and of repurposed materials but, in addition, these shimmering monuments to modernity also serve to highlight the deep contradictions between the abundant natural resources of the region and the social aspirations of the city’s inhabitants,” he said.

“This new trend can also be seen as an experimental solution for climate-crisis architecture, a kind of platinum spacesuit built to withstand the most extreme weather conditions on earth.”

Hollander is a fine art and documentary photographer from New York City who is based in Cali, Colombia.