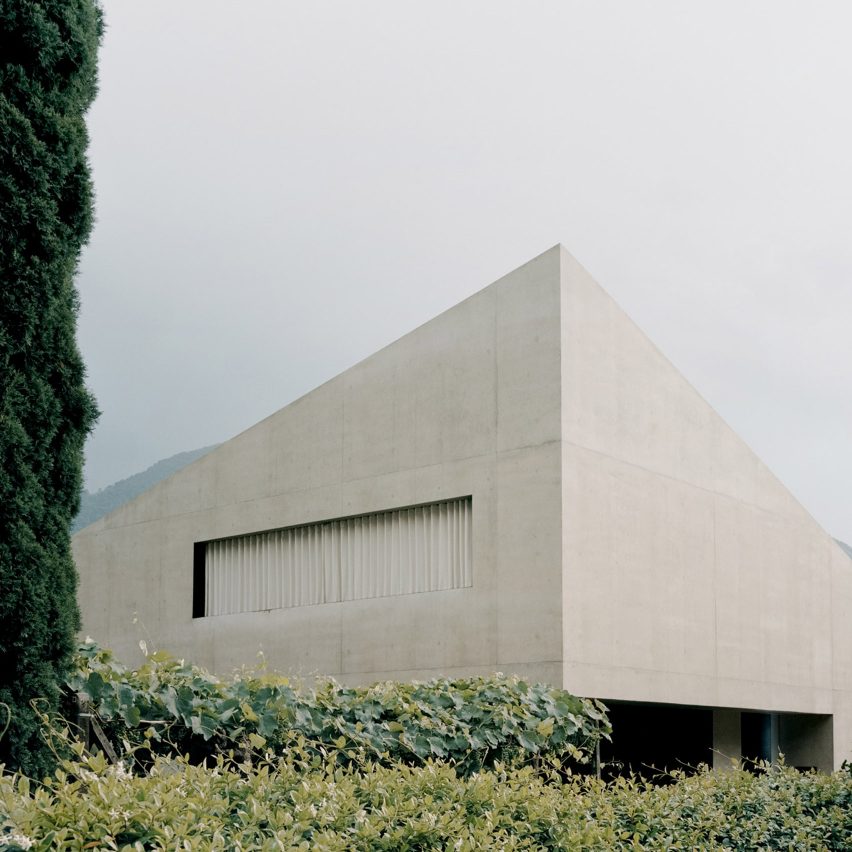 DF_DC has used concrete to create a monolithic house in the town of Tegna, Switzerland, which takes cues from Japanese architecture and the surrounding mountains.

Named Pyramid House, it was commissioned by a family who wanted a “one-of-a-kind” dwelling that challenged the look of neighbouring houses while maintaining their privacy.

To achieve this, architecture studio DF_DC designed a seemingly impermeable concrete structure that is “devoid of any symbol of domesticity”.

This echoes bunker-like houses found in Japan, informed by the client’s interest in Japanese architecture, while also nodding to the mountainscape surrounding the town.

“The brief asked for a house for a family of four, two parents and two daughters, a sort of a one-of-a-kind house that contrasted with the way of living in suburban row houses,” the studio’s co-founder Diego Calderon said.

“The clients are enthusiasts of Japanese architecture and were willing to take risks with the project,” he told Dezeen.

Pyramid House has an L-shaped plan and sloping, a triangular form containing two storeys. At the rear is a courtyard, partially enclosed by the folded form of the house.

While the front of the house appears to be inaccessible, the hidden rear side that faces the garden is largely glazed and opens out to the outside.

“The form derives from the concept of an inhabited enclosure, with the idea to immure a rear garden and to integrate it to the common areas through the wide glazing,” said Calderon.

“The massing strategy formed an impermeable element to the street, which in turn is very open towards the garden.”

The courtyard at the rear of the house leads into two smaller patio spaces, which are concealed within the walls of the house.

These smaller courtyards then open into the ground floor, which the studio said connects the garden to the house “in the most discreet way”.

Inside, Pyramid House’s ground floor comprises a large open-plan kitchen and dining area, which folds around the L-shaped plan into a large living room.

A curved staircase tucks into the centre of the ground floor and leads to the upper level, which accommodates the bedrooms, bathrooms and a study.

The first floor is lit and ventilated by cut-outs in the slope of the house’s pyramidal form – designed to frame the views out to the mountains.

Throughout, the home’s interiors are deliberately pared-back, with white-painted walls that are designed to echo the minimalist finish of the building’s exterior.

Ornament is kept to a minimum, with one of the only standout features being a hanging, black fireplace in the living room.

DF_DC is an architecture studio founded in 2016 by Dario Franchini and Diego Calderon. It has offices in London, UK, and Lugano, Switzerland.

Elsewhere in Switzerland, the practice also recently completed a concrete house that has an outdoor terrace that is banded by a colonnade of rectangular columns.

Photography is by Simone Bossi.