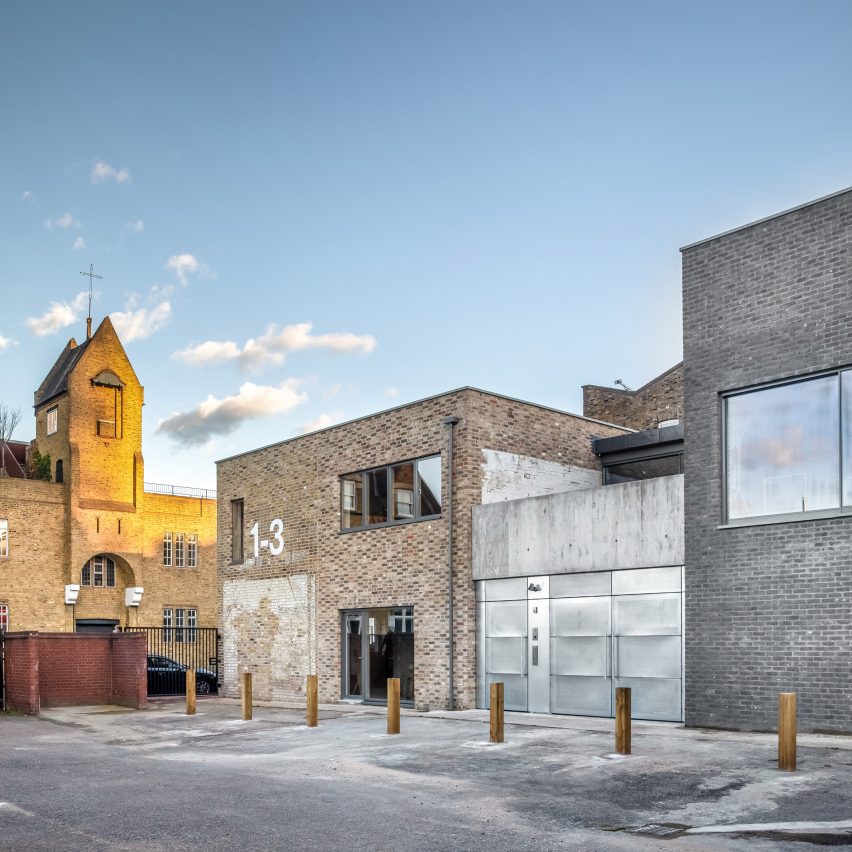 Together with Cassion Castle Architects, London studio Pearson Lloyd has designed and retrofitted a Victorian workshop to house its own studio as well as workshops, meeting rooms and an exhibition space.

Yorkton Workshops is set on Yorkton Street in east London and comprises two distinct buildings – a warehouse structure next to a Victorian workshop – which the studios retrofitted to suit Pearson Lloyd’s vision of its headquarters.

The designers came to the decision after initially looking at constructing a new building for the site.

“Before commissioning Cassion Castle, we spent a year looking into the feasibility of building a new building on the site,” Pearson Lloyd co-founder Tom Lloyd said.

“However, we finally made the decision that we wanted to make the absolute most of the existing fabric of the building from both a sustainability point of view,” Lloyd added.

“Over the long term, the embedded energy within the existing fabric far outweighs any reduced efficiency in its thermal performance where we have not been able to upgrade its performance through insulating.”

When the studio acquired the 560-square-metres (6027-square-foot) Yorkton Workshops in 2017 it was “a mess,” it said, but it worked to keep much of the original design.

“Working with the existing fabric of the building, the ambition was to express the old and new in as honest a fashion as possible,” co-founder Luke Pearson added.

“We have left as much of the original fabric exposed as we can and wanted to maintain the sense that we are working in workshops, as this was the original function of the buildings.”

Elements that were kept from the external envelope were updated, including the concrete ground-bearing floor slabs, and new roofs were added. A large industrial-steel staircase now welcomes guests into the entrance area.

“This started with the early decision to retain as much of the existing structure as possible to reduce embodied carbon,” he added. “In addition a range of measures were employed in order to reduce the energy consumption in use including super-insulation and air-tightness, photovoltaics, and passive user comfort.”

“We also recycled many of the materials from the demolition back into the finished building.”

Yorkton Workshops had a number of constraints that Cassion Castle Architects, which was also the main contractor, worked around.

“In some cases the existing material was very uneven, but structurally sound and full of character, so we retained and worked with it, instead of just removing it for the sake of ease,” Castle said.

“As a company we often work as both architect and main contractor as we did on this project. This combined role enabled a more reactive ongoing design process whereby we would continually uncover something unexpected and re-detail around it.”

The Victorian part of the building now houses meeting and events spaces, while the warehouse space holds workshops and studio space.

Pearson Lloyd wanted to retain a sense of being in a workshop and chose the materials for the project accordingly.

“Key choices include the wood-fibre acoustic ceiling, the steel stair, the workshop floor (made from the same material as stage floors and haulage trucks) and the reclaimed and refinished pitch pine floor,” Pearson said.

“The orange staircase colour is drawn from the colours that tools and industrial equipment use to signal their function. Practical and universal and direct.”

Yorkton Workshops also contains an outdoor garden, a roof terrace that bridges the Victorian and warehouse wings, and a gallery space.

“We are very interested in the idea of an event space that we can use to engage with the wider community of East London whether creative, social or educational,” Lloyd said. “Hopefully this will emerge as a reality after Covid 19.”

Pearson Lloyd moved into the studio in September of this year and is currently occupying it at reduced density because of Covid-19. The studio’s recent work includes a tubular steel flat-pack chair for Danish brand Takt.