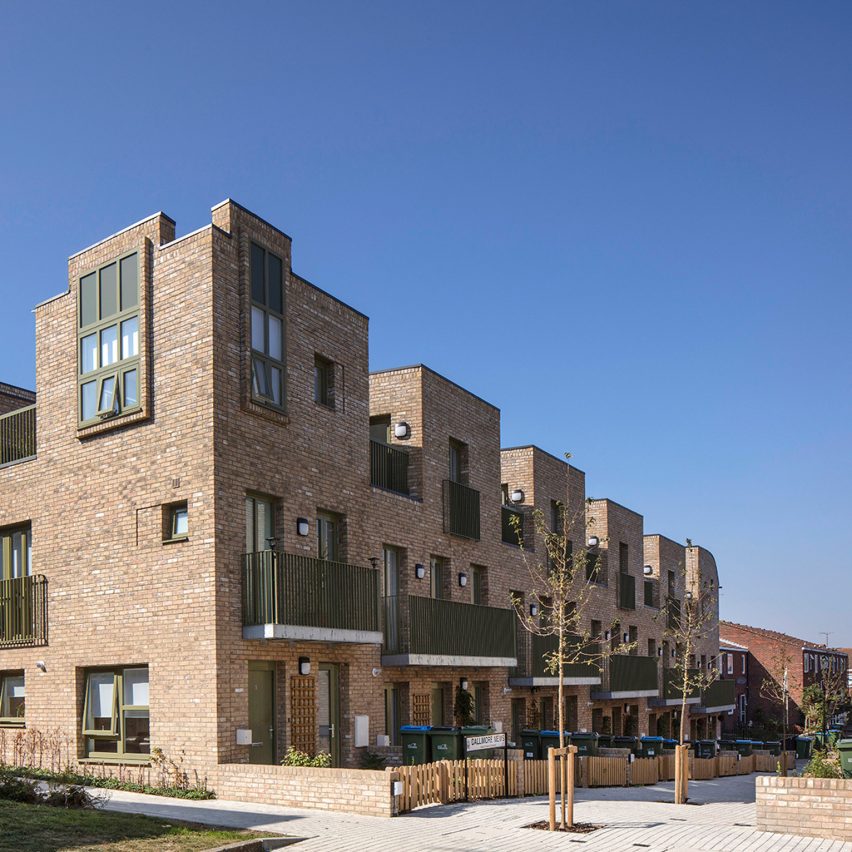 Named Sandpit Place, the development contains 32 homes in three rows of back-to-back terraced houses. Like the studio’s nearby Rochester Way scheme the homes were built for Meridian Home Start and will be available to those working locally at discounted rents.

“The project is street-based terraced housing,” explained Peter Barber Architects founder Peter Barber. “To some extent, the houses themselves borrow their layout from Victorian mews houses,” he told Dezeen.

“Being pretty square in plan and stepping back at the rear to allow light and ventilation and private roof terraces instead of back gardens.”

The development was built on a previously walled-in site that contained a disability resource centre.

Peter Barber Architects arranged the 30 two-bed houses and two one-bed homes on a series of pedestrian streets that were designed to open up the site and connect the homes to the existing estate.

“Our project is arranged in a ladder of streets which provide a handy cut-through for people… to the bus stop, corner shop and out to the main road,” said Barber.

“The new streets we have made link to existing streets and public routes,” he continued. “That way we hope it might help it to feel like part of the neighbourhood and that people living close by feel connected with it, and newcomers might settle in more readily.”

The majority of the homes have an open plan kitchen and dining room on the ground floor as well as a toilet, with a bedroom and bathroom on the first and an additional bedroom on the second floor.

All of the bedrooms open out onto a terrace, with many having access to two. All of the homes also have small privates spaces alongside the pedestrian streets.

“We like terraced houses because of the way that they make an edge to the street. At Sandpit Place we have given people big front gardens,” he continued. “People are starting to sit out – there are paddling pools, baby bouncers, pots with flowers, bikes and loads of other stuff. They are starting to look lived in.”

“We think that the street is the basic building block of the city and that urban housing should be laid out in streets,” explained Barber.

“Over the years we have experimented with numerous house/housing types – mansion blocks, cottage flats, terraced housing, courtyard housing and back to backs. This mews variant is the most recent and we think is quite a good model for medium density lower rise street-based housing.”

In London, Peter Barber Architects has previously completed five terraces of affordable homes in Greenwich, a housing scheme fronted with brick arches in east London, a reinterpretation of Victorian back-to-back housing in Stratford and a terrace of mews houses that feature oriel windows in Finsbury Park.

Photography is by Morley Von Sternberg.