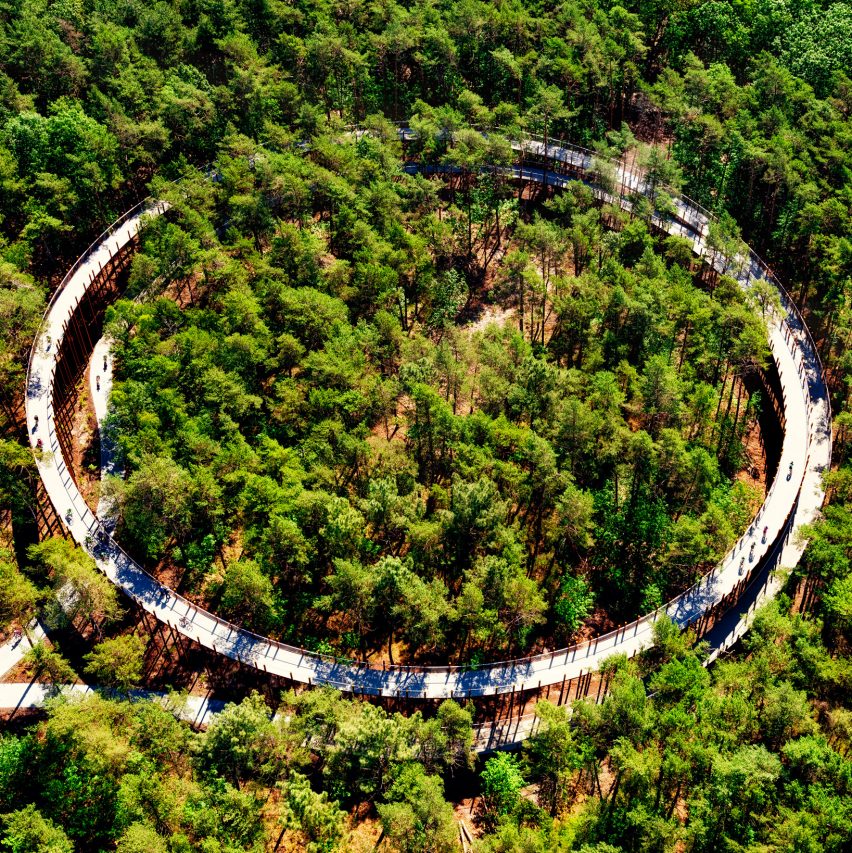 Belgian studios BuroLandschap and De Gregorio & Partners have created a circular track called Cycling Through The Trees as part of the cycling network in the province of Limburg.

As its name suggests, Cycling Through The Trees is a raised path that takes cyclists up to a height of 10 metres above the ground so that they can ride amongst the treetops.

The circular path in Belgium has been shortlisted for infrastructure project of the year at  ArchitectureAwards 2020.

Built for tourism organisation Visit Limburg in the Pijnven nature reserve, the structure is a double circle that is 100 metres in diameter.

The three-metre-wide path is almost 700 metres long and rises at a gentle gradient to a height of 10 metres before descending back to the forest floor.

Landscape architect BuroLandschap and architect De Gregorio & Partners designed the structure to enable people to engage with the forest but were mindful that the attraction should have the least possible impact on its surroundings.

Several trees did have to be felled and these were incorporated into a rest stop built near the attraction.

“The most important thing for us was to build a structure with the lowest possible impact on the environment and the sensitive nature present,” explained BuroLandschap founder Pieter Daenen. “This was the starting point!”

“The trees were of course very important,” said Daenen. “After all, cycling through the trees would no longer make sense if trees were damaged or destroyed after the construction of the structure,” he continued.

“Something that is not easy for a construction with a diameter of more than 100 meters and a height of 10 meters.”

The unusual visitor attraction was designed to be a magical experience for those cycling through the nature reserve near the town of Bosland.

“The nice thing about the construction is the round spiral shape. Cycling around in combination with cycling in height has something magical,” said Daenen.

“It seems as if visitors are becoming children again. You often see visitors who drive around several times. Moreover, the ride of 600 meters is quite pleasant and not too hard, even if your condition is not too good.”

The structure’s deck and supports are made from weathered steel, which has a browny orange colour that is similar to the colour of the pine tree trunks in the forest.

“Brown is the colour of the earth, after ‘green’ this is the most common colour in nature,” explained Daenen. “Brown always blends well in an environment.”

Daenen hopes that Cycling Through The Trees will draw people to the forest who may not usually come and draw attention to the forests near Bosland. This in turn will ensure that the environment is preserved.

“Bosland is the largest continuous forest in Flanders, which is still known by relatively few inhabitants,” he said. “The construction attracts a separate audience that normally does not move quickly to this environment.”

“These people also help advance the local economy,” he continued. “Governments are also enthusiastic about this and are convinced that forests can also offer economic added value. As a result, they will also support the conservation of the forests more.”

Cycling Through The Tree is shortlisted for a ArchitectureAward against projects including a curved cycling bridge in Copenhagen designed by WilkinsonEyre and Urban Agency and a weathering steel footbridge by Useful Studio in London.

Photography is by Toerisme Limburg.