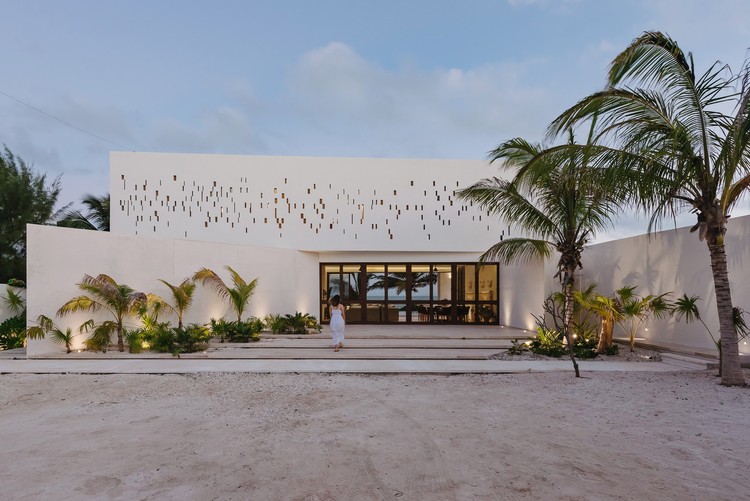 Text description provided by the architects. The Yucatan Peninsula is one of the geographical points around the world with greatest potential in wind power energies.

Yucatan is located in a latitude and longitude where dominant winds blow from east, north-east, and south-east on average, because of the pressure difference between the high of the Azores over the Atlantic and the intertropical convergence zone in the north of Ecuador.

The breeze is generated due to the great difference of temperature between the Yucatan peninsula ground level and the ocean level. When the temperature is really high, by the afternoon, hot air goes up because of its light density leaving an empty space that gets filled by the cold air around.

In this case, the only breeze that we focused on is the one that comes from the sea and gets into the coasts of Campeche, Yucatán and Quintana Roo. This is the reason why there is a cooling effect temperature in the afternoon and a change in the wind’s direction, mostly from the north-east, with speeds that sometimes can be of serious magnitude.

“This is a standard condition in Yucatán and due to this circumstance, the use of weather vanes was adapted a few years ago.”

We use the predominant factors founded in the context with a serious interest on the wind behavior so we could use it as a tool rather than an obstacle, understanding its speed, direction and temperature along the year, and likewise the attempt to evolve against common house typologies around the zone.

From the wind direction analysis, we knew the average angle of every year, which is around 45 degrees. Therefore, we propose the rotation of structural elements so we avoid the creation of voids in contrast to dispose perpendicular elements in reference to the sea, as it is found in nearby constructions; some volumes were rotated allowing a constant wind flow and speed acceleration.

Natural ventilation only works when the wind is able to get through with no obstacles on its path and so we named that effect “cross ventilation”.

Therefore, we propose an intersection of flexible elements or cross points that could react according to the hour, day or month of the year, to keep controlling the speed and the quantity required and so the regulation of the inside temperature.

Wind control elements are implemented with shutters, perforated walls and sliding windows. In addition, these elements allow to control the interaction between social and private areas with the flexibility to react according to the activities.

This house breaks with common beach house schemes by being a quiet member of the environment, coexisting and exalting the context, not competing against it.