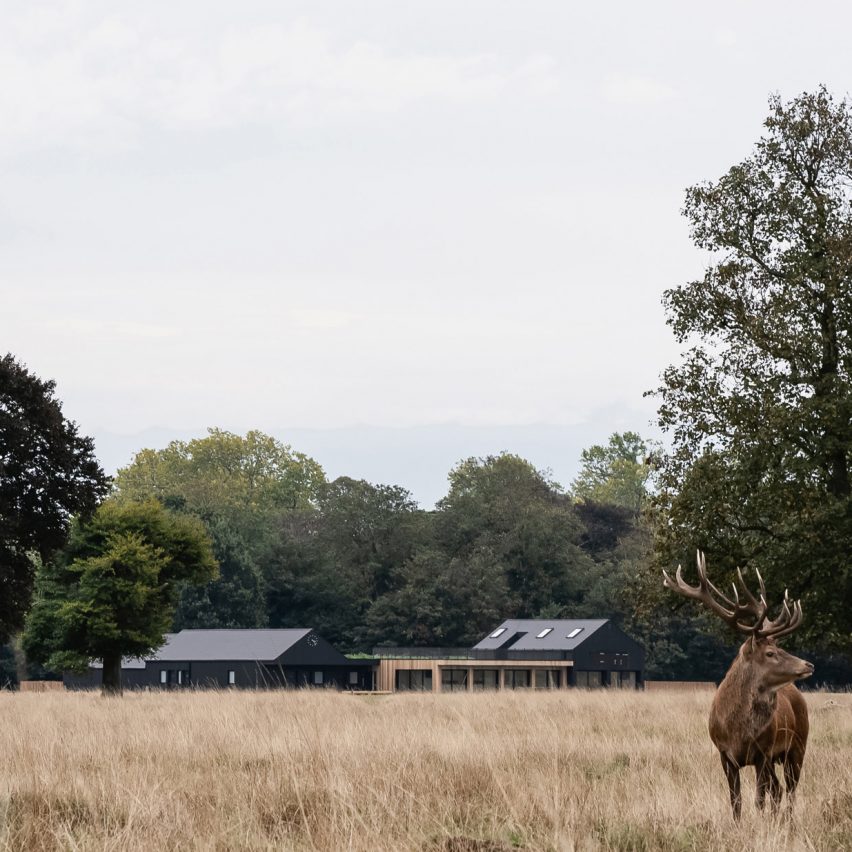 UK architecture studio Reed Watts has created a timber clubhouse for an amateur cricket team in London’s Bushy Park that is designed to be both modern and familiar.

The sports pavilion was built to provide changing facilities and social spaces for Teddington Cricket Club, which has been based in Bushy Park – a Royal Park alongside Hampton Court Palace in Richmond upon Thames, south-west London – since 1863.

Reed Watts designed the building to replace the club’s previous clubhouse in a pair of prefabricated huts that were built in world war two.

The studio wanted Teddington Cricket Club’s new pavilion to reference these former structures and be respectful to its scenic location in the Royal Park.

“The core concept responded to the dual brief of club and landowner to create a discrete but identifiable building that maintains the beautiful setting of the Bushy Park, while doubling the amount of floor space of the club’s current building,” explained Reed Watts’ co-founder Jim Reed, who describes himself as a local resident and “reluctant part-time cricketer” who often gets roped into playing for the team.

“We were keen to design a distinctly modern structure but also one that imbued a sense of familiarity that would put users and park visitors at ease,” he told Dezeen.

“The new building works better for spectators as well as players, providing better views and facilities while referencing the form of the previous clubhouse, fashioned from two Nissen Huts.”

The clubhouse is formed from two black, pitched roof structures – one fronted by a clock and the other a scoreboard – connected by a flat-roofed section clad in natural-coloured timber.

“We kept the form simple, with little ornamentation,” said Reed. “The focus is on the activity, in this case cricket – the players, umpires, clock and scoreboard.”

“These are easily distinguished against the calm timber backdrop of the pavilion,” he added. “There’s a familiarity to it without pastiche.”

The central section, along with the smaller of the pitched roof structures, contains the club’s public spaces, which were designed so they could also be used by the local community.

This block contains a bar and cafe with large windows to give views of the pitch, along with toilets, the club office and scorer’s box. A roof terrace on top of the flat-roofed section provides an additional viewing area for spectators.

The second pitched-roof block contains four hanging rooms for players and one for match officials, as well as storage spaces for equipment.

The structure combines a wooden frame with a structural insulated panel (SIP) system of walls made from timber, and is clad in larch that was stained black for the pitched-roof structures.

According to the studio, this timber finish was designed to soften the building’s appearance in the park.

“Finding an appropriate language to respond to the mature landscape setting of Bushy Park was key,” explained Reed.

“The strong form of the clubhouse is softened by the Siberian larch cladding, which helps to nestle the building against the backdrop of mature trees,” he continued. “The L-shaped plan also relates to the dual cricket pitches – with each flank facing a pitch – and is used to hide the training nets to the rear.”

Overall, Reed Watts aimed to create a building that was modern but still clearly recognisable as a cricket clubhouse.

“There seemed to be an expectation that new pavilions should be reproductions of Edwardian buildings with little or no sense of place,” said Reed.

“Before we became involved, this is what the club had imagined – white render, red tiles and a dovecot – a generic typology,” he continued.

“We didn’t think this represented the club’s ambitions or values and certainly did little to respond to the landscape setting. While the new building does reference historical forms, the layout and minimal detailing are distinctly modern.”

London-based architecture studio Reed Watts was established in 2015 by Reed and Matt Watts. The studio previously designed a set of modular sleeping pods from wooden panels as temporary accommodation for homeless people in London.

Photography is by Ben Tynegate.