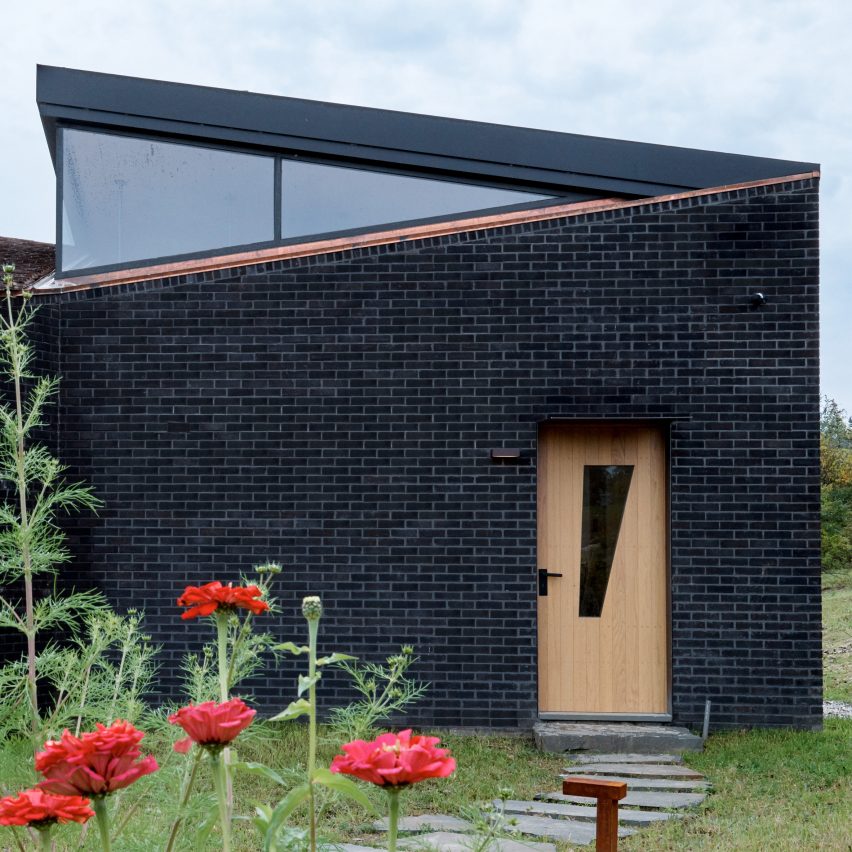 US studio GRT Architects has completed this black house with huge triangular windows in New York’s Dutchess County with the layout of an open-plan studio.

The project in Dutchess County, which is just under two hours drive from New York City, was created for a couple thinking about permanently moving out of Manhattan.

While the move was not confirmed they tasked Brooklyn-based GRT Architects to create a bolthole on a 24-acre (9.7-hectare) plot to accommodate their children and grandchildren.

Dutchess County Studio is composed of three rectangular volumes arranged in a pinwheel to overlap one another. Textured black brickwork walls are slanted at the top to meet with triangular clerestory windows.

“Each mass has an identical roof atop a beak-like clerestory window but asymmetry was introduced in response to the site,” GRT Architects said.

The roof of the house is clad in natural cedar with copper trim, chosen to complement the brickwork.

“Outside, the studio is clad in textured black brick, a material that plays optical tricks depending on lighting, sometimes flattening the complex mass into a single plane,” the studio explained. “The roof is clad in natural cedar shakes with copper trim intended to add a warmer aspect to the design.”

Inside, three exposed black ceiling beams mark the meeting of the three volumes above the kitchen area – this forms the central space in the project, which is designed to have an open-plan layout like a studio apartment.

“The masses meet at a centre point, marked by the pinwheel intersection of three steel beams but the interior is conceived as three subtly implied rooms, each oriented each to a different view,” it added.

Steps lead down to the third volume, which is intended to be occupied by a bedroom, and is located on a lower level due to the slope of the sight. This block has a huge window with views outside. The other two wings are occupied by the lounge – with a murphy bed for guests – and a small bathroom.

Because the residence has an open floor plan, the studio has used pale wood cabinets to divide the kitchen area from the sunken bedroom, and offer privacy. A simple material palette of white-painted walls, built-in pale wood furniture topped with custom terazzo made by Kaza Concrete, and concrete flooring runs throughout.

According to the studio, the concrete slab is radiant and forms part of an environmentally friendly approach to heating and cooling the house without fossil fuels. Other facilities include the “clean burning” Flores 8 stove by Buntfires, which has reduced toxic emissions.

The bathroom is the only space separated by walls. Pink-tinted Moroccan Tadelakt plaster covers the walls inside and is complemented by a reddish sink, golden details and warm woods.

Stone steps lead down from the house at the top of the slope to a swimming pool, which GRT Architects created as part of a masterplan for the site. The studio is also planning to complete a dock and workshop.

GRT Architects was founded by Tal Schori and Rustam-Marc Mehta in Brooklyn, New York in 2014. The studio’s other projects in New York State include Manhattan’s Bourke Street Bakery, the renovation of an Upstate mid-century house and an office with millennial-pink kitchen and dark “nap room”.

Photography is by Ithai Schori.