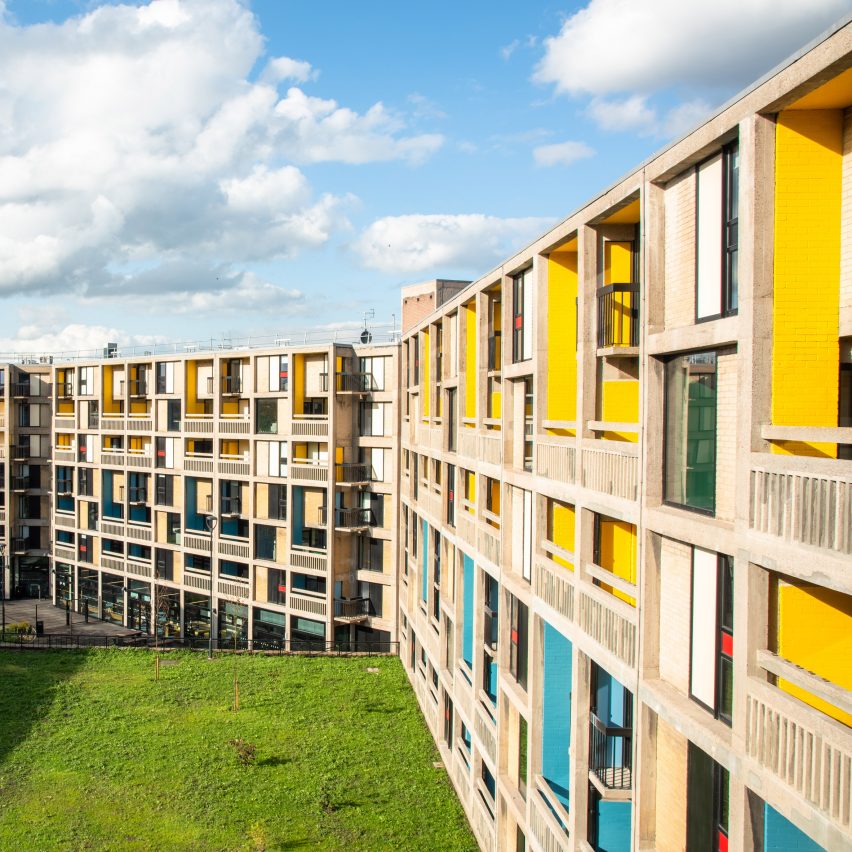 The concrete exterior and interiors have been decorated in a Le Corbusier-informed colour palette.

A derelict ground floor building has been turned into a large communal area with a gym, cinema and a private dining room.

The Grade II*-listed social housing estate built between 1957 and 1961 has been turned into a combination of private homes and student halls of residence by developer Urban Splash.

Student housing developer Alumno oversaw the transformation of one wing into managed student housing, along with design studios BK Design and Brinkworth.

Built by architects Jack Lynn and Ivor Smith in the brutalist style, the housing blocks are raised up on plinths.

The studio turned the undercroft, originally used to hold public toilets, into communal spaces for students.

“A ‘minimal impact’ approach was developed which preserved and
restored the surface of the brick and concrete across the building,” explained the studio.

The architects used a “wet scraped and clear sealed” approach to cleaning the concrete, rather than power blasting it, to preserve the faint pinkish hue of the stone.

“The texture and colour variation present in the concrete has been preserved. Original mortar pointing has been retained where possible because we felt it was carefully specified to match the original bricks,” the studio said.

The block was renamed Béton House after the French word for raw concrete – Béton brut – popularised by modernist architecture.

Burnt orange, bottle green, scarlet, and mustard tones were taken from a mosaic that once adorned the Parkway Tavern, the local pub that served the Park Hill Estate in its heyday.

Covered up at one point, the glass mosaic with its distinctive stripes and red crown is back on display having been painstakingly restored by experts Olicana Mosaics.

Interior designers Tatham Studio used the same colour scheme for the student bedrooms. Furniture is bespoke, along with a selection of original Scandinavian pieces.

A wayfinding scheme for Béton House was created by Graphic Thought Facility, using the same colour picked out in terrazzo-style aggregate chips in cast concrete signs.

The font used throughout is called Founders Grotesk, a contemporary interpretation of the 20th-century fonts made in the Stephenson Blake foundry across the way from Park Hill.

Phrases relating to the history of the Park Hill Estate are picked out in bold graphics on the outdoor corridors.

One, stating “it really was streets in the sky” references Sheffield Council’s postwar goal of clearing slums and transferring residents wholesale to new high-rise rows of homes.

Park Hill’s architects were influenced by Le Corbusier’s mass housing programmes. The elevated pedestrian walkways were designed to be wide enough to drive a milk float down.

Decades after Park Hill was left to fall into disrepair by the government, Urban Splash stepped in with its private regenerations scheme.

“I liked the idea that someone could enter into Park Hill as a student, graduate from university, get a job in Sheffield and then maybe move up into homeownership in Park Hill.”

Architects HawkinsBrown and urban designers Studio Egret West undertook the first phase, which includes 260 renovated apartments – 40 per cent sold at the UK’s “affordable” rate – and new ground-floor retail spaces. It was nominated for the 2013 Stirling Prize.

Architecture studio Mikhail Riches is doing the second phase of housing, creating 199 apartments that will be decorated externally with colourful balconies.

After government grants were cut, no affordable homes were included in plans for this next phase. Concerns were raised by local residents that a key fob system could lead to segregation between the first phase and the more expensive second.

“We still think the right approach in principle is for it to be spread throughout, but it’s not possible to deliver that at this point in time,” Urban Splash’s regeneration director Mark Latham told Dezeen.

“It’s important that it doesn’t create a different character or a ‘them and us’ feel to the two phases. The idea is that everybody is part of the Park Hill community.”

Photography is by Louise Melchior.